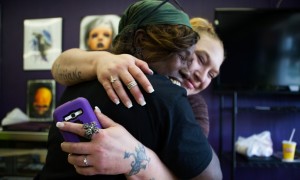 Crowned. When you read the word, what descriptions come to mind? For most, it signifies one who is deemed royal, favored, respected, and dignified. But for women who have been the victim of sex trafficking, being “crowned” has a completely different meaning.

Recent reports show that when a woman is coerced into sexual slavery her pimp will often brand her like an animal, declaring his “ownership” over her body. Traffickers will often tattoo a crown, gang symbol, or money sign on a woman’s body as well as phrases such as “Property of” and then the exploiter’s name. These women are stamped with a permanent reminder of their exploitation.

Even more sickening, some of those women were children when they were brought into prostitution. At as early as age 12, pimps will get the young women addicted to drugs so that they don’t leave.

Jennifer Kempton was one of those women. At age 12, she was forced into prostitution in the city where she grew up, Columbus, Ohio. She was addicted to drugs, beaten, and forced to have sex with hundreds of men. In 2013, Jennifer felt she’d had enough.