By CWALAC StaffJuly 28, 2015Blog, News and Events, Support for Israel

Quick! Someone Common Core this for me!

Have you ever heard the one-liner, “Over 78% of statistics are made up on the spot”? Well, that joke has now made it to the White House — and the president loves to tell variations of it at his press conferences. 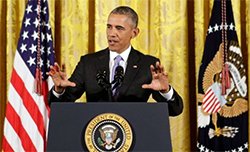 Most recently, the president claimed that “99% of the world community” thinks his Iran “deal” (read: “disaster”) is a great idea that will do exactly what we know it won’t (i.e., keep the “Death to America/Death to Israel”-chanting Iranians from building nukes with which to make good on those chants).

“I’m hearing a lot of talking points being repeated that this is a bad deal. That this is a historically bad deal. This will threaten Israel and threaten the world and threaten the United States.  There’s been a lot of that. What I haven’t heard is what is your alternative. If 99% of the world community and the majority of nuclear experts look at this and say ‘This will prevent Iran from getting the bomb,’ and you are arguing either that it does not, or even if it does it’s temporary, or because they are going to get a windfall of their accounts being unfrozen they’ll cause more problems, then you should have some alternative to present.”

So if 99% of the world community loves Obama’s plan, then that one percent that doesn’t love it must include the 71% of respondents to a March NBC/Wall Street Journal poll and 64% from an end-of-June CNN/ORC poll who believe that the president’s deal would not keep Iran from producing nuclear weapons. And it must also include Israel. And it must also include the entirety of the Middle East which, according to U.S. officials and experts — who obviously weren’t included in Obama’s “majority of nuclear experts” — will likely initiate “a wave of nuclear research and threatening rhetoric that will make the region even more of a tinderbox than it is now.” Kind of a sizable one percent, don’t you think?

And as for an alternative? As they said over at the Gateway Pundit, “As if [Obama] would listen to an opponent’s alternative. Get real.” But let’s start with this old, tried-and-true principle: “Don’t negotiate with terrorists.” Peace through strength and resolve. Follow that simple idea, and America and Israel wouldn’t now be in the crosshairs of a lunatic government, and the rest of the Middle East wouldn’t be scrambling for defensive measures.

But this is only the most recent example of “presidential math.” Let’s not forget this doozy:

This is something even the liberal-leaning Washington Post took issue with and a point addressed and debunked in Concerned Women for America’s booklet, A War No More: The Truth Behind the “War on Women.”

There’s also this one:

“We’re going to work with your employer to lower the cost of your premiums by up to $2,500 a year.”

Then, of course, there’s the politically motivated move to make community college “free.” Granted, the taxpayers would be on the hook for roughly $80 billion over the next 10 years, but who’s counting? Well, frankly, those of us who are paying for it.

But I wonder if the kids who are cheering for those four years of free tuition have done the simple math and figured out that 10 – 4 = 6. And I wonder if they realize that, under that plan, they might not pay for four years of community college, but they’ll be on the hook with the rest of us for that last six years?

So yeah, the president’s math kinda stinks, but just try to keep laughing. And remember, “84% of statistics are made up on the spot.”