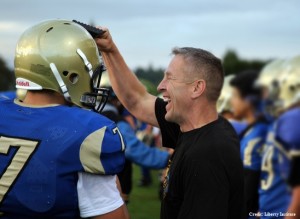 Just last month, Bremerton High School assistant football coach Joe Kennedy was suspended for praying on the 50-yard line after games — something he’s been doing since 2008. Apparently, the school claimed that Kennedy’s personal prayer was in violation of the First Amendment’s Establishment Clause because it would appear that a public institution was endorsing a particular religion.

In the Bremerton School District’s statement on Coach Kennedy, the school district stated that his “conduct poses a genuine risk that the District will be liable for violating the federal and state constitutional rights of students or others.”

But last month, the deafening sounds of brutality in Paris, France, if only for a moment, have silenced prayer opposition. As scenes of bloodshed and the murder of innocent civilians panned across our television screens, prayers seemed to be the only appropriate words to utter. After the horrific tragedy, we saw expressions of solidarity like #PrayForParis or the NFL’s loosened regulations on public display.

Isn’t it interesting that a few in our society will fight tooth and nail to remove prayer from all public proceedings, like in the case of Coach Kennedy, yet when tragedy strikes — suddenly prayer is not so offensive?