By CWALAC StaffOctober 15, 2015Blog, News and Events, Sanctity of Life

Planned Parenthood announced in a letter on Tuesday that they would no longer accept money for tissue reimbursement programs.  In other words, Planned Parenthood will not be charging the research companies or (presumably) the middlemen involved in the transport of fetal tissue. 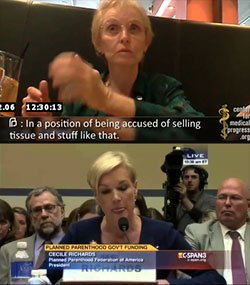 So they are going to stop selling baby parts.

But they are naive in thinking this makes all their problems go away.  In fact. this development reveals that Planned Parenthood is very scared of the attacks against them.  They are trying everything, from hiring a high-profile PR firm to now stopping the so-called “cost reimbursements” for tissue “donation.”  They are facing so much pushback from investigations, activists, and public opinion that this is their attempt at settling things down.

But those who oppose the work of Planned Parenthood certainly won’t stop now. Planned Parenthood has ironically acknowledged the immorality of profiting from fetal tissue, but not of harvesting that tissue in the first place – something they will still do.  The abortion giant still has so much explaining to do about procedural changes, profits they got up to this point, covering up sex trafficking, and many other offenses over the years.  The federal investigations against them will not cease because they have now changed their policy in an attempt to look good.

And that attempt could backfire. Planned Parenthood’s new found refusal to accept “reimbursement” from fetal tissue research companies proves one of two things: either Planned Parenthood has more than enough money to cover the cost of these programs, or there isn’t much cost to begin with.  This is key.

On the one hand, Planned Parenthood’s ability to recoup the costs of fetal donation on their own shows they have plenty of money and certainly aren’t in need of federal funding as they decide to carry on this inhumane experimentation.  Then again, if it’s really cheap to harvest and transport fetal tissue, then they were certainly profiting off of it when they were charging exorbitant fees per specimen.

So Planned Parenthood is either rich enough to survive without the taxpayer, or they were definitely profiting off fetal tissue research and, thus, breaking the law and deserve defunding.  It’s highly likely that both are true.

Ironically, Planned Parenthood’s decision to recoup their own costs for fetal tissue research has added to the case to defund them by reinforcing the case against them morally, financially, and legally. And defunding them is exactly what we should do.

Chaney Mullins is a special projects writer for Concerned Women for America who specializes in the Sanctity of Life issue.