By CWALAC StaffSeptember 29, 2015Blog, News and Events, Sanctity of Life 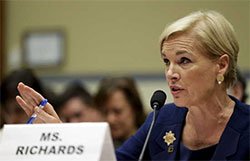 This week, Planned Parenthood CEO Cecile Richards was called before the House Oversight Committee.  The question of the day was whether Planned Parenthood deserved federal funding (a decision Congress put off by passing a temporary budget until December when the debate on passing a budget will resume). Miss Richards was the only one questioned with Republicans grilling her and Democrats rushing to her defense.

The hearing was sparked by the Center for Medical Progress undercover videos which show Planned Parenthood’s illegal activity. Using the videos as a starting point, members of the Oversite Committee plunged deep into the larger spending habits of Planned Parenthood and the things that make them unworthy of funding. Planned Parenthood, Republicans pointed out, uses money for exorbitant salaries ($520,000 just for Cecile Richards — by her own admission!), overseas funding ventures, pro-choice political lobbying, and expanding their services, though they are already the largest abortion provider in America.

Planned Parenthood makes millions in excess revenue each year and does not need federal money to continue its mission. Proposals to defund have two components — 60 million federal dollars directly, and around $500 million more government reimbursements for Medicaid services. Though Medicaid money can’t go directly to abortion (except in cases of rape, incest, or the mother’s life), the money Planned Parenthood gets from the government allows them to move their other sources of revenue into their abortion-centric business and their questionable lobbying efforts.

If you were watching the hearing and felt like pulling your hair out (trust me, we understand), then you’re probably wondering, “What can I do?” Beyond calling your senators and representatives, learning more about Planned Parenthood, and signing a petition, there are several important ways a concerned Christian can be involved:

Don’t be silent about what is happening. So many still don’t know about the videos or don’t think they can trust them. Discuss them, and prove them wrong. Pray for those who stand against us, especially mislead pro-choice advocates like hurting post-abortive women.  Pray for Cecile Richards that God would touch her heart. We need to treat her with the same human dignity we wish she would extend to the unborn.

2.  We need to actually be the medical alternative to Planned Parenthood.

The pro-life movement has done an excellent job of meeting many needs, such as counseling, baby supplies, ultrasounds, post-abortive healing, legal advocacy, and educational initiatives.  Unfortunately, we have let Planned Parenthood hold a monopoly on medical services like family planning, STD testing, and breast exams. It is true that community health centers, primary care doctors, and increasing numbers of medicalized pregnancy centers and non-profit OBGYNs serve many of the health needs of women, but the pro-life movement itself is still primarily non-medical, a reality that needs to be addressed.

Planned Parenthood is so successful in many ways because of their marketing and the coherency of their affiliates in a way that makes women think Planned Parenthood is the only option, when scattered community health centers are little known, underfunded, and underutilized. As we consider offering alternatives, we should carefully strategize marketing, franchising, and name ID.

4.  We need to question Planned Parenthood’s lies that they help women.

Because Planned Parenthood is such a recognizable name in women’s healthcare, they’re thus able to define the terms of their services, leaving many women unaware of findings such as abortion’s link to breast cancer, certain health risks of some birth control, potential abortifacients, and the effectiveness of hormone-free family planning.  Furthermore, Planned Parenthood has essentially made “women’s health” synonymous with birth control and abortion, denying or minimizing all other health issues facing American women.  For instance, the number one killer of women is heart disease, and we do not hear them discussing that fact.  They also continue pushing the ideology that the government should be the one funding their “healthcare” services, despite the deep controversy and possible criminal activity of Planned Parenthood.