Once Upon a Time Features Lesbian Kiss, Devalues Friendship

By CWALAC StaffMay 17, 2016Blog, Defense of Family, News and Events 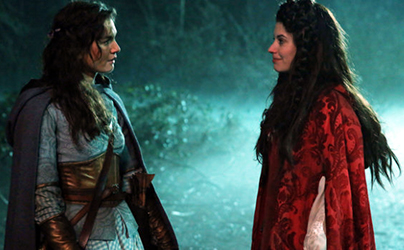 ABC boasts one of the most popular, family-friendly shows in Once Upon a Time.  This fairy tale characters mash-up has given five seasons of an exploration of family, belonging, love, and even redemption.  Orphaned Emma has found family; the Evil Queen has become good, and love has persevered through hardship – again and again.

The writing decision was already strange, as Ruby has previously had a boyfriend earlier in the show (they clearly left the question of chosen vs. inborn sexuality aside) and even some on the left felt the story was too rushed to justify the designation of “true love.”  But the plot’s decisive offense lies in its intentional normalization of homosexuality on prime-time, Sunday night, TV-PG, family-friendly television.

The creators justified their decision by saying “This is the world we live in” and “True love’s kiss has been a staple of this show since the beginning, this past Sunday’s episode was just another example of how in a fairy tale, as in life, love is love.”

But does their own writing hold up to that standard?

Indeed, the show has featured several kisses of “true love” breaking sleeping and other curses in typical Snow White/Sleeping Beauty fashion.  Most notably, the show has already established how familial love is strong enough to break any curse.  In the same episode as the lesbian kiss, Belle said her father could wake her from her own sleeping curse, and the characters had first sought Aunt Em to break Dorothy’s curse.  Most notably, even the non-blood-related love of Regina for her adopted son Henry broke a curse!

But if “love is love” then – according to the show’s own standards – love is not sex!  And if love is not sex – if adopted family love is powerful enough to break a curse – then why isn’t platonic love able to as well?

There are a lot of different kinds of love.  True, deep, caring love.  And if love is wanting the good of another, than sometimes that love would be sexual, other times it certainly would not be.

As I watched the episode, I kept wondering why the love the cluster of storybook characters were showing Dorothy wasn’t enough to awaken her.  What does it take for love to be “true”?  Cannot a genuine care constitute true love?  It did for Regina to Henry.  The definition of true love has already expanded beyond sex.  Why not between friends?  And can’t we all speak of friends who become so close to us, we describe them as “chosen” or “spiritual” family?

The episode, thus, is not only tragically normalizing homosexuality, but oversexualizing all love, while especially devaluing the love of friendship.

Both women in the plot were lonely.  In this story retelling, Ruby had failed to find other human/wolves like her, and Dorothy had been abandoned by her family when she told them about Oz.  It is natural that their human need for relationships would drive them towards one another. But there is no need for this to take on a sexual nature.  Their relationship didn’t need sex to be love, and it didn’t need a kiss to be deep and true.

This lesbian kiss would never have aired even five years ago, which is when the show began.  But now “this is the world we live in.”

So what can we as Christians, saddened by this drastic cultural turn, do in the face of such a world?

Many of us continue to pray and fight for religious freedom protections and fight to protect our own marriages.  We are learning to talk in age-appropriate ways with our children about healthy sexuality and its perversions.  We maintain ultimate hope in the Savoir who longs to redeem sexual brokenness and all of culture.

Let us add to these responses that we also work to advance the beautiful truth of chaste friendship as a valid form of love.