Obama Fires Off Another Condescending Potshot 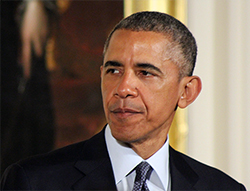 Pay attention, Christian America. Your betters have spoken. At Monday’s White House Easter Prayer Breakfast, President Obama took yet another one of his infamous swings at Christians. “On Easter, I do reflect that as a Christian, I am supposed to love. And I have to say that sometimes, when I listen to less than loving expressions by Christians, I get concerned,” he said. Naturally, this close to the kerfuffle surrounding Indiana’s Religious Freedom and Restoration Act (RFRA), one can only imagine that denying cake (or even Easter eggs!) to homosexuals was on his mind. Then, in his laughably affable “I went there, but I won’t go there” kind of way, he shrugged it off with, “That’s a topic for another day.”

So, the president is “concerned” about Christians who simply want to exercise their First Amendment rights? How predictable. Christians around the United States are being forced by the government to participate in actions that are contrary to their beliefs (for pity’s sake, he’s still targeting Little Sisters of the Poor). Instead of dividing the country by criticizing Christians, the president could have taken the opportunity to unify the country on an issue that breaks our hearts: the persecution of Christians around the world.

He failed to mention the “less than loving” attack on the campus of a university in Kenya, where nearly 150 Christians were murdered for their faith. But that atrocity was committed by militant Islamists, so perhaps that’s excusable by the president. Yes, that may sound harsh, but let’s not forget the fact that this is the same man who, in February, wagged his finger at Christians during a different prayer breakfast and attempted to beat them over the head with the Crusades, accusing Christians of committing “terrible deeds in the name of Christ” and comparing us all to radical Islamic terrorists.

This is not the first time — nor, regrettably, will it be the last — that the president has shown contempt towards the faith he professes to, well, profess. While traveling in Turkey, in 2009, President Obama claimed that “We [Americans] do not consider ourselves a Christian nation or a Jewish nation or a Muslim nation.” Wow. Really?

The president does not speak for all Americans when he makes these out-of-touch and inflammatory remarks. Although the United States by design eschews an established, national religion, we ignore at our own peril that it does, indeed, have a Biblical Christian foundation.

And yet, he ignores it. During a speech in Indonesia in 2010, he intentionally quoted a much older motto of the United States (E pluribus Unum) instead of our current motto, “In God We Trust.” If you can’t see that this president has a proven track record of hostility towards Christianity, you’re simply not paying attention.

His most recent comments at the Easter Prayer Breakfast offer further proof that Christians are being publically and systematically shamed for exercising their First Amendment right to religious liberty, not only around the world, but by the very person who has sworn to faithfully execute the law that enables us to freely exercise our faith.

Indeed, it is both ironic and chilling that the president took the platform at a prayer breakfast intended for the remembrance and celebration of Christ’s death and resurrection and twisted it into a tool with which to crucify his fellow Christians. And that he felt perfectly free to do so does not bode well for people of faith. Dark days lie ahead.