By Mario Diaz, Esq.September 3, 2014News and Events, Sanctity of Life 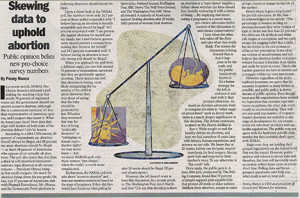 In a recent article, NARAL Pro-Choice America released a poll making the startling claim that nearly 70 percent of registered voters say the government should not restrict access to abortion. Although this is a convenient narrative, it’s less than representative of American opinion, and I suspect they know it. What do Americans think? How does that align with leaders of both sides of the abortion debate? Let’s be honest.

According to a 2014 CNN survey, 20 percent of respondents say abortion should always be illegal, and 38 percent say most abortions should be illegal — so that’s 58 percent of Americans who oppose all or virtually all abortions. The poll also states that less than a third of self-identified Democrats embrace legal abortion in all circumstances — President Obama being in that small category. (So much for abortion being above his pay grade.) In fact, just 27 percent of Americans side with Planned Parenthood, Mr. Obama, and the Democratic Party platform in believing abortions should always be legal.

Read the rest of this column at WashingtonTimes.com.