NANCE: Judge Kavanaugh can be trusted to safeguard our First Amendment rights 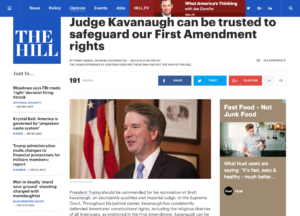 President Trump should be commended for his nomination of Brett Kavanaugh, an abundantly qualified and impartial judge, to the Supreme Court. Throughout his judicial career, Kavanaugh has consistently defended Americans’ constitutional rights, including the religious liberties of all Americans, as enshrined in the First Amendment. Kavanaugh can be trusted to continue to protect this fundamental right as a justice on the nation’s highest court.

First and foremost, Judge Kavanaugh understands that judges must base their rulings on the text of the Constitution and the law, not on their own personal political beliefs or policy preferences. In a keynote address at Notre Dame Law School last year, Kavanaugh explained this obligation: “I believe very deeply in those visions of the rule of law as a law of rules, and of the judge as umpire,” he said. “By that, I mean a neutral, impartial judiciary that decides cases based on settled principles without regard to policy preferences or political allegiances or which party is on which side in a particular case.”

Click here to read the rest of this op-ed as featured on The Hill.