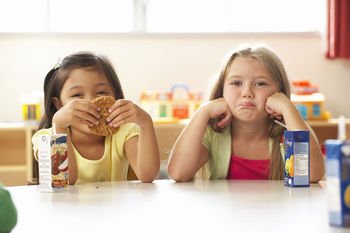 Michelle Obama is right about one thing: Our children are — there is no other way to say it — fat and unhealthy. According to The Center for Disease Control and Prevention, 18 percent of children 6-11 years old and 21 percent of children 12-19 years old are obese. Why? It’s easy. Have you seen what they’re eating? These children are being fed unhealthy diets at school and often at home as well. To top it off, 8-18-year olds spend nearly seven and a half hours a day using media, like watching TV, being on the computer, playing video games, or being on their phones, according to the Kaiser Family Foundation. We truly have reached a health crisis in terms of our future generation.

It’s not rocket science. Every health class textbook will reveal that in order for our bodies to maintain a healthy weight, we need to burn more calories than we take in, but in a sedentary culture we aren’t doing that. Yes, the problem is simple, but Michelle Obama is determined to instill a complex set of remedies that hurt more than they help.

So, here’s where I differ with the First Lady. Her answer to our children’s expanding waistlines is to make the school districts serve better lunches and urge the poor to eat organic. She also addresses exercise. It all sounds good, but it’s really not working.

School districts are complaining that the new rules are busting their budgets and that the kids won’t eat the food they are serving. Mrs. Obama basically overreached on a worthy goal. Instead of worrying about getting the poor to eat expensive organic food, she should have just settled on getting them to eat an apple, instead of an apple pie. Not an organic apple, just an apple. But she’s clueless as to the cost of the food for which she advocates. As part of her initiative, Michelle has been pushing for more “farmers markets,” one of which is a block away from my office with a plethora of options even my professional staff can’t afford. Take a look at the demographic, and you’ll see it isn’t the poor at the farmer’s markets buying $10 organic pulled pork sandwiches.

I have no problem with Michelle trying to persuade everyone to eat a little better. Especially since her husband’s universal healthcare law makes us all a little more concerned about each other’s lifestyles. But let’s call it like it is. It’s not D.C.’s impoverished who are dining at her farmer’s markets, it’s White House staffers and the like.

Instead of such rigid standards, maybe the school cafeteria — subsidized with my tax dollars by the way — should limit the selling of chips, cookies, ice cream, and other junk food. I maintain that it’s not the pizza that’s making kids fat but the other side choices that join it on that little plastic tray. I agree: No soda. Let them buy that outside of school. Water or skim milk or, heck, even chocolate skim milk is fine. But what’s objectionable about a peanut butter sandwich (not every kid is allergic), an apple, and milk? Done, and done cheap.

A piece by Kathleen Parker in Sunday’s Washington Post reminded me of the old-fashioned Home Economics classes that most of us took in high school. That is where my mother, from a very impoverished family, learned to not feed her children too much fried food and to have a plethora of “colors” on our plates. It’s where I learned to do just what Parker described in her piece: spread some peanut butter and banana on a piece of toast to make a quick and nutritious breakfast, apparently for 50 cents. Sounds like a good plan to me. Teach a kid to fish and all. Unfortunately, these classes fell out of favor about the same time as, according to Parker, “the kitchen became a metaphor for homebound drudgery.” Moms (and Dads) got too busy to make lunches for our kids, and the whole cooking thing became a real drag, unless of course you are watching it on the cooking network.

Because we are raising the next generation, once we notice Junior getting a little fluffy, it’s our problem and our responsibility to fix. As a mom of two, I know it’s up to me to set the example. Clean out the pantry of junk food, pack a good lunch, and get the family outside to play. Yes, the kids will complain at first, until the screen door bangs shut behind them and memories start being made. If that doesn’t work (gasp!), take away your children’s electronics. Oh yes, I went there. Bottom line Moms and Dads, this is on us — not Michelle Obama, not the junk food companies, not the school, us. Put down the remote and do something about it. Let’s move.

Penny Nance is CEO and President of Concerned Women for America.