Manchester Reminds Us the Church Must Be Engaged 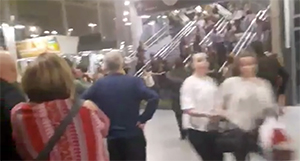 At least 22 died yesterday and another 120 more were injured (so far) after a bomb detonation at the Ariana Grande concert in Manchester, England.  It is an incredible tragedy.

Our thoughts and prayers are with the victims and their families, and they are also against the forces of evil behind this attack.

We often refer to these attacks as “senseless” acts of violence, and though I sympathize with the sentiment, truth is they are nothing of the sort.  As we have come to expect, ISIS has now claimed responsibility for the suicide bombing.  These attacks are purposeful, encouraged, and driven by an ideology with tangible goals.

World governments must fight back against it in terms of their political and territorial aspirations.  But this enemy cannot be defeated through these efforts alone.  Their goals are primarily spiritual, and that is why the Church is so important.

As Paul reminded us in 2 Corinthians 10, “[T]hough we live in the world, we do not wage war as the world does.  The weapons we fight with are not the weapons of the world. On the contrary, they have divine power to demolish strongholds” (NIV).

Our spiritual weapons can attack what military forces can’t — the ideology. Verse 5 of that 10th Chapter in 2 Corinthians reminds us, “We demolish arguments and every pretension that sets itself up against the knowledge of God, and we take captive every thought to make it obedient to Christ” (NIV).

It is a battle of ideas that manifests itself in these acts of violence.  Therefore, destroying the ideas, demolishing their arguments, is how true victory against this evil group can be attained.

So, there is an ironic twist to this.  We, as the Church of Jesus Christ, must take a look at ourselves, instead of ISIS.  It is we who must focus on the basic principles of our faith.  Take on that full armor of God (Ephesians 6) to be ready and able to war against the devil’s schemes.

“For our struggle is not against flesh and blood, but against the rulers, against the authorities, against the powers of this dark world and against the spiritual forces of evil in the heavenly realms,” Paul reasoned (Ephesians 6:12, NIV).

He commanded us to put on the belt of truth, the breastplate of righteousness, the boots of the gospel of peace, the shield of faith, the helmet of salvation, and the sword of the Spirit.

But we have slacked off on Paul’s exhortation.  The belt of truth has been gone for so long, even our trousers have been lost, leaving only our shame.  We’ve forgotten the definition of righteousness altogether.  A watered-down Gospel is preached in order to make it palatable to the new generation.  The shield of faith?  We’ve used each other as shields ever since “believe in yourself” has become our motto.  The helmet of salvation has become more of a baseball cap, easily blown by the slightest wind.  And we’ve traded our antiquated swords of the Spirit (which is the Word of God, according to Paul) at the local pawn shop for a more practical spirituality that fits our lifestyle.

It is impossible to fight (much less win) the spiritual battle before us in such a sad state.

Let us turn back to our God then.  For He is “merciful and gracious, slow to anger and abounding in steadfast love” (Psalm 103:8 ESV).

This can be accomplished through prayer which Paul does not forget as he completes the description of the full armor of God: “And pray in the Spirit on all occasions with all kinds of prayers and requests. With this in mind, be alert and always keep on praying for all the Lord’s people,” (Ephesians 6:18, NIV).

I pray our Christian convictions will impress on us these important principles of our Christian faith, that we may remind each other in the days ahead as we prepare ourselves to deal with the next “Manchester.”