Major wins this week for the federal circuit courts 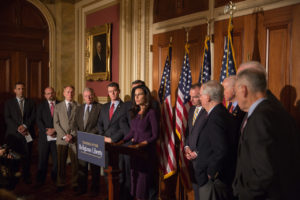 On Monday, October 30, Penny was asked to speak at a press conference at the Capitol led by Senate Majority Leader Mitch McConnell and Senate Judiciary Committee Chairman Chuck Grassley(R-Iowa) and including other Republican Senators as well as religious liberty groups. The conference was regarding the nomination of Amy Coney Barrett to the 7th Circuit Court of Appeals.

Remember that Professor Amy Coney Barrett was the nominee who was attacked by Sen. Dianne Feinstein (D-California) for her strong faith. Sen. Feinstein created a religious litmus test when she insinuated that Prof. Barrett was unfit for the job because the “dogma lives loudly” within her.

Concerned Women for America has stood behind Prof. Barrett’s nomination from the beginning. On Monday Penny stood before a room full of media, proud to represent you and to affirm support for this abundantly qualified woman of faith.

“As the CEO and President of Concerned Women for America, the largest public policy organization for women in the nation, I am honored to support Professor Barrett as a more-than-qualified candidate for the 7th Circuit Court of Appeals. Professor Barrett is unquestionably qualified for this appointment . . . I was disappointed to see in her confirmation hearing the inappropriate questioning of her faith. This Christian “dogma” that a few find appalling embodies the best of humanity.”

Monday’s press conference was specific to Professor Barrett’s confirmation but also highlighted the larger issue of judicial confirmations as a whole. Republicans have control of the House and Senate and yet confirming judicial nominees has moved at an extremely slow rate. Professor Barret was one of four nominees to be confirmed within the week along with Justice Joan Larsen nominated to the 6th Circuit Court of Appeals, Colorado Supreme Court Justice Allison Eid for the 10th Circuit and Stephanos Bibas for the 3rd Circuit.

We are hopeful that this momentum will be sustained, and we will be working to ensure that is the case. Democrat senators may continue to slow the process as much as they can but voting against these stalwart men and women of character says more about them than the nominees.

Thank you for doing your part in this process and making your voices heard on this important issue.