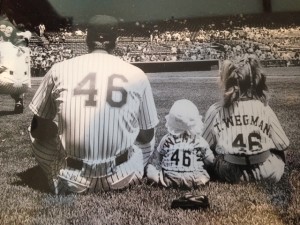 It’s October 1, 1992. The Milwaukee Brewers are playing the Seattle Mariners. The Brewers were two games out of first place with only four games left in the season. My dad steps up to the pitcher’s mound and pitches 10 innings. In those 10 innings, he gave up only two runs on just four hits. For those who know baseball, you know this is extremely difficult to do. My dad got the 7-2 win over the Mariners that night, and in doing so, kept the Brewers in the pennant race.

My dad had made it to the “top.” He had achieved what most boys dream about achieving. When he was little, he told me that he used to sleep in his uniform the night before a game; he was that excited and that dedicated to America’s pastime. If that tells you anything, making it to the Major Leagues was his dream and would have made his life complete. Or at least that’s what he thought …

Read the rest of this article here: http://www.christianpost.com/news/major-league-baseball-didnt-make-a-major-league-dad-but-christ-did-140767/