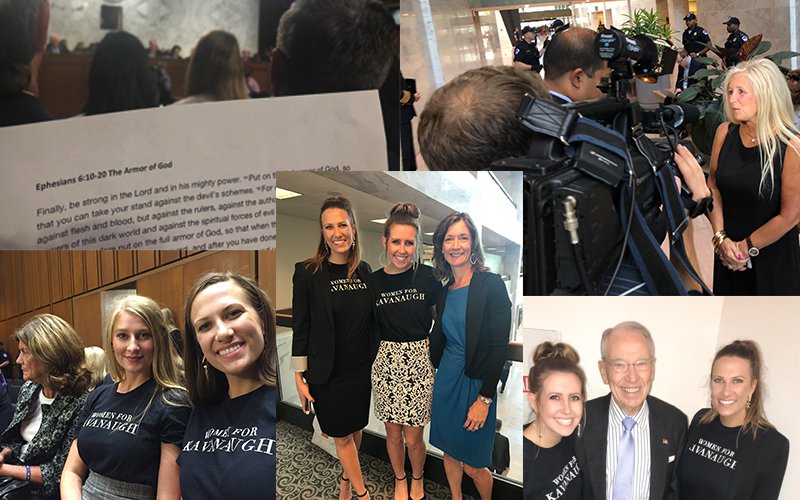 Today’s update of Kavanaugh’s outstanding performance before the Senate Judiciary Committee must start with the debacle that was Sen. Cory Booker (D-New Jersey) and Sen. Kamala Harris (D-California) as they questioned the nominee late last night.

To sum, it was all fluff and no substance. Sen. Booker decided to question Kavanaugh on emails from the Bush White House that the nominee could not access (more on that drama later).  One particular email Sen. Booker focused on as particularly ominous actually showed Judge Kavanaugh agreeing with Sen. Booker that racial profiling shouldn’t be used. But the pompous way and mysterious circumstances of the whole exchange, where the email couldn’t be shown were all very dramatic.

It was clear Sen. Booker was there to make a point and was not interested at all on anything Kavanaugh had to say. The ironic thing is that Kavanaugh has shown through his record that he has been one of the leading voices advocating for minorities in the legal field.

Here is a bit of what he said about his efforts to help get more minority law clerks:

“Justice Thomas and Justice Brayer were testifying before the Appropriations Committee, and they were asked about minority law clerks and the lack of them at the Supreme Court. And they said, in essence, we’re hiring from the lower courts. And I remember reading that and thinking, well, I need to do something about that. I’m the lower court. I’m one of them. So, after that, I thought what can I do? And I didn’t just sit there. I went and thought what can I do, and I started on my own going to the Yale Black Law Students Association every year starting in 2012. I think I’m the only judge who has done something like that, or one of the few. And I just cold-called them, cold-e-mailed them and said I’d like to speak about minority law clerk hiring because I’m told there’s a problem there. And I showed up the first time wondering how it would go, and I explained, and I got a good crowd from the Black Law Students Association. And I said we need more law clerks. There’s a problem. Let me tell you how to do it. Here’s why you should clerk, and here’s how you clerk. Here are the classes you should take and the things you need. And I gave them my phone number and e-mail and said call me any time if you want to help. And it was a big success.  I got a lot of e-mails after that. I helped students. I help students get clerkships with other judges. One of them recently finished the Supreme Court and thanked me for starting him on that road…  I’ve continued to encourage African American law clerks, but not just encouragement. I’ve given them help and advice and been a source of counsel… I tried to be very proactive on that, including my own court hiring where there are only networks that prevented women and African Americans and minorities from getting clerkships, I have been very aggressive about trying to break down those barriers and be very proactive on that.”

Sen. Booker should be highlighting these great efforts, lifting Kavanaugh up as a model for other judges to follow. Instead, he was blatantly disparaging Kavanaugh’s record with unsubstantiated innuendo to make him look as if he didn’t care about civil rights.

Sen. Harris was also incredibly disappointing in her questions. She was very aggressive, and you can tell she came out “for blood,” so to speak. But, substantively, she delivered very little.  The most telling exchange came when she dramatically asked Judge Kavanaugh over and over, “Have you discussed Mueller or his investigation with anyone at Kasowitz Benson Torres, the law firm founded by Marc Kasowitz, President Trump’s personal lawyer?”

As you might expect, Judge Kavanaugh was apprehensive and said he didn’t think so and he would need to see who works there.  But Sen. Harris was stern: “Be sure about your answer, sir.”

The social media commentary was ratcheted up a hundred-fold. What did she know? She went so far as to tell him, “I think you’re thinking of someone, and you don’t want to tell us.”

But as The Los Angeles Times reported, there was no big reveal. It was all a show and it, “failed miserably.” So miserably, the law firm itself had to respond that they had no idea about what she was talking. “There have been no discussions regarding Robert Mueller’s investigation between Judge Kavanaugh and anyone at our firm,” a spokesman told CNBC.

The amazing thing, though, was the incredible demeanor and grace with which Judge Kavanaugh treated all of them. After more than 12 hours of questioning and answering questions with very few breaks, he was still in good spirits to the very end.

And today it was more of the same. Judge Kavanaugh started and remained in that same spirit of cordiality and respect towards all there.

Which brings us back to more of Sen. Booker’s antics. While complaining about the emails that he couldn’t show yesterday to the Judge because they were marked “Committee Confidential,” which meant he would need to discuss them with the Judge at the private session they had today, Sen. Booker revealed he was defying Senate rules and the committee to release the emails publicly. He was engaging in an act of “civil disobedience,” like Martin Luther King, Jr.

“I’m saying I’m knowingly violating the rules,” he said dramatically, referring to the moment as his “Spartacus moment,” if you can believe it.

Only the documents he was releasing as an act of public disobedience had already been opened to the public the night before after a simple request was made. A statement from the George W. Bush’s record representative read, “We cleared the documents last night shortly after Senator Booker’s staff asked us to. We were surprised to learn about Senator Booker’s histrionics this morning because we had already told him he could use the documents publicly. In fact, we have said yes to every request made by the Senate Democrats to make documents public.”

And so, the hearings went on. The histrionics (which seems like an appropriate term) will surely continue. But Judge Kavanaugh was magnificent. There is no other way of putting it.

Tonight, they will conduct a private session with the judge and tomorrow several outside groups will speak in support and against his nomination. But his work is done—largely mistake-free.