How I Became a Young Woman for America 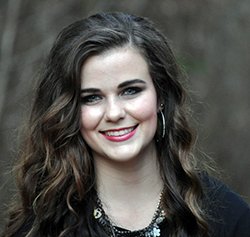 Growing up in a small, southern Arkansas “Bible Belt” town, my political and religious beliefs did not need to be explained, and no one ever challenged them, since most of the town was of the same opinions as I. After graduating from high school, I decided to attend Lyon College in Batesville, Arkansas. This college is a private, liberal arts college that is liberal in every sense of the word. Though it is in the middle of a conservative town, there are very few religious and conservative groups on campus. I felt intimidated, as if I could not speak out about my beliefs on campus without receiving contemptuous reactions. I then joined a sorority and felt as if my voice was being smothered even more. I was miserable, and I knew that God had different plans for me. He had made it possible for me to attend this amazing college; so what was His plan?

This past summer, I found myself preparing to travel to Washington, D.C., to intern at a pro-life organization. Before I had even made it into D.C., God was working. When I stopped in a store in Fairfax, Virginia, the owner of the store asked if I was a Christian and told me that he was sure God had great plans for me this summer. He didn’t know me at all, and he had not talked to me more than five minutes when he made that statement. I knew then that it was by God’s grace I was able to take this trip and that He had a plan for my future. Unbeknownst to me, the store owner was completely right about how great God’s plan for me was and is.

Two weeks into my internship, I met my mentor, who was assigned to me through the internship program. She worked for Concerned Women for America (CWA), but we had not talked enough for me to know much about their special projects. Within the third week of my internship, another young woman I worked with was talking about Young Women for America (a special project of CWA). She invited me to a lunch with some of the women who worked there to learn more about it. I loved the whole aspect of standing up for my Christian beliefs while also dealing with public policy and the government. By my fourth week of interning, I decided I wanted to commit to this decision to be a part of Young Women for America by taking it back to my college in Arkansas.

Young Women for America has given me new hopes and new goals. After committing to the organization, I dropped my sorority letters. This was the hardest thing that I have ever done, but after talking with God, my family, friends, and mentor, I knew it was the right thing. I now have an executive board of six great girls who are extremely passionate about this organization. I have turned into a young woman who does not sit back anymore when someone challenges my beliefs. Young Women for America has helped me grow as a person and as a Christian. Because of the lovely women at the CWA headquarters and throughout the nation who have the same passion as I do, I now have the strength and courage to make positive changes on my campus and in my state.