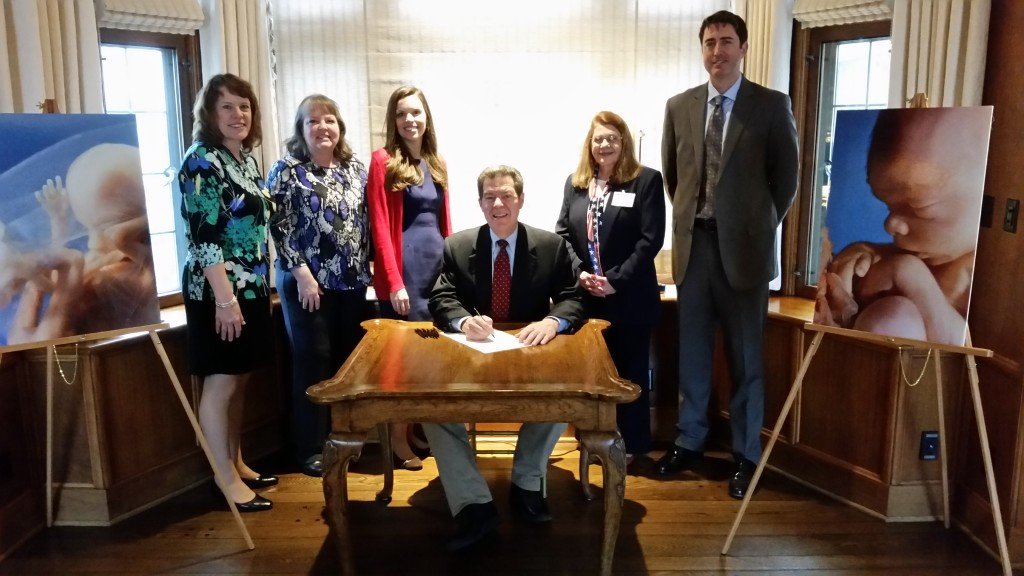 Tuesday was a day to remember as Gov. Brownback signed the Kansas Child Protection From Dismemberment Act (SB95) into law. This bill will save hundreds of lives from a gruesome death every year.

The signing took place at the governor’s mansion, Cedar Crest, in the very room where Former Governor Kathleen Sebelius, George Tiller, and LeRoy Carhart once had their pictures taken nearly ten years ago. Concentrated prayer and action changes things!

No longer is this document a bill, but it is now Kansas law that will go into effect on July 1. Abortionists will no longer be able to use this procedure in our great state. “Praise the Lord!”

This law bans all dismemberment abortions. As stated in the act, “’Dismemberment Abortion’ means, with the purpose of causing the death of an unborn child, knowingly dismembering a living unborn child and extracting such unborn child one piece at a time from the uterus through the use of clamps, grasping forceps, tongs, scissors or similar instruments that, through the convergence of two rigid levers, slice, crush or grasp a portion of the unborn child’s body in order to cut or rip it off.” This is a historical piece of legislation. Kansas has become the first state to ban dismemberment abortions. It paves the way for other states to follow suit.

I thank every one of you for the part you played in this tremendous victory. Your prayers of faith and your works of phone calls and letters made a difference.

“What does it profit, my brethren, if someone says he has faith but does not have works? Can faith save him? If a brother or sister is naked and destitute of daily food, and one of you says to them, “Depart in peace, be warmed and filled,” but you do not give them the things which are needed for the body, what does it profit?” James 2:14-16

Gov. Brownback commented, “This is a horrific procedure, and we are pleased to ban it in Kansas, and we hope it will be banned nationally.”

Lead sponsor, Sen. Garrett Love (R-Montezuma), remarked, “In visiting with my constituents, many have been stunned that this practice (dismemberment) is going on in Kansas and have demanded that it be stopped.”

To commemorate this ground-breaking and first-in-the-nation measure, Gov. Brownback will travel across Kansas for ceremonial signings of the bill on April 28. We will notify you of the locations as soon as they are available.

Take Action: Mark your calendar now to participate in one of these signings on April 28.

Pray: Please continue praying for the unborn and their families; pray that someday we will be able to pass a bill that fully protects all human life.

Go to our website to view the history of SB95 through the legislative process and the part CWA of Kansas played.