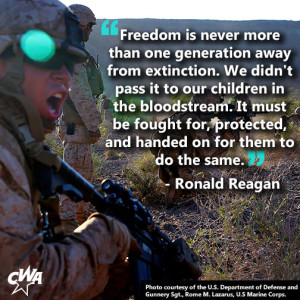 G.K Chesterton once said: “Courage is almost a contradiction in terms. It means a strong desire to live taking the form of readiness to die.” This Veterans Day, let’s thank the 20 million veterans in the United States of America. Selfless men and women who have sacrificed more than we can begin to imagine in order to insure that Americans have freedom of speech, freedom of the press, freedom of religion, and so many other liberties. We see some of those freedoms, particularly religious freedom, under attack; however, Americans are still enjoying more freedom now than any other nation in the world. We have incredible veterans to thank for defending and protecting our great country. They fought against Nazism, communism, and terrorism so we could be free on earth. As I reflect on those great battles, I think of the Victor of the ultimate war, Jesus Christ, who fought the most epic battle against sin and death which granted us eternal freedom. 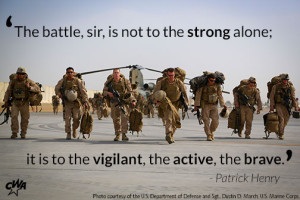 Galatians 5:1 says: “For freedom Christ has set us free; stand firm therefore, and do not submit again to a yoke of slavery.” It continues on to say in verse 13 “For you were called to freedom, brothers. Only do not use your freedom as an opportunity for the flesh, but through love, serve one another.”

As Christians, we have the opportunity to use our freedom in Christ, and our amazing freedom in this country, to love and serve others. Use that freedom well. Glorify the Father with the freedom that you have been given. Continue to fight against evil. And finally, remember to love and serve our great veterans and thank them for fighting for our ability to do just that.