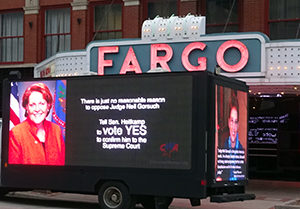 It might be hard for some to believe, given the continuous drumbeat by the media, but Judge Neil Gorsuch has bipartisan support to be confirmed as the next U.S. Supreme Court Justice.

He, of course, has the full support of Republican senators, but Sens. Joe Donnelly (D-Indiana), Joe Manchin (D-West Virginia), and Heidi Heitkamp (D-North Dakota) have also expressed their support of his nomination.  In addition, Sen. Michael Bennet (D-Colorado) is not standing with his Democratic colleagues in support of a filibuster, instead committing to vote for cloture.  I expect him to ultimately vote for final confirmation as well.

This is a testament to Judge Gorsuch’s incredible credentials.  They are simply undisputed by all who have examined his record, including the liberal American Bar Association, which gave him its highest rating for the position, “unanimously, well qualified.”

These facts are enough to see right through the radicalism of the opposition and its media enablers.  Judge Gorsuch is objectively a consensus nominee.

The only purely partisan effort surrounding him is the efforts of Democrats crying “uncle” to the radical left’s phony indignation against anything and everything even remotely related to President Trump.

Or are they really accusing their fellow Democrats voting in support of Gorsuch of being part of the “right-wing”?

No, they know Judge Gorsuch does not deserve the treatment they are giving him.  They know their Democratic colleagues are doing the reasonable thing.  In years past, Judge Gorsuch would have received little opposition.  But we live in the times of President Trump, and emotions are running unreasonably high.

The Democrat elite are trying to rebuild the party after President Obama, and it looks like they feel they do not have the strength to withstand the radical left, believing instead they can use their anti-Trump energy to form a sort of “tea party” of the left.

Bottom line: the left is furious and out for blood.

So you see, opposition to Gorsuch has nothing to do with the nominee and everything to do with political resentment.  They’ve been tempted to just lay the blame on the treatment of Judge Garland, but that is just an excuse to justify their actions.

To lay the blame for the judicial appointments wars, one must go way beyond the last year of President Obama, where they conveniently start the narrative to oppose Judge Gorsuch.  The discussion includes Sen. Harry Reid abolishing the filibuster in 2013 and names like Miguel Estrada and Robert Bork.  But you don’t hear discussion of any of that from Democrats or from their media enablers.

And again, all of it continues to confirm that, despite what their lips are saying about Gorsuch’s record, it is not about him at all.  He should be swiftly confirmed.

His filibuster is about appeasing and keeping the radical left energized, blatantly ignoring whether it is the right thing to do for the Senate, the Supreme Court, or the American people in general.

That is why Donnelly, Manchin, and Heitkamp deserve a lot of credit.  They represent the type of leaders that we need in the Senate — leaders who are confident enough to stand up to unreasonable pressure from their own side.

Sure, we don’t agree with them on most issues.  But they are doing the right thing on this nomination.  Their constituents should be pleased with them on this.

You want a leader who responds to pressure, but resists unreasonable pressure.  And that is what the opposition against Judge Gorsuch is, unreasonable and extreme.

Judge Gorsuch showed throughout the hearings that he is a man who will abide by the Constitution and the laws as enacted.  This means either party can advance their agenda through the proper channels provided by the constitution to do so.  This is a win for all Americans, regardless of their political views.

That is why we can all feel confident and proud as we look forward to Justice Gorsuch taking his spot at 1 First Street, NE, Washington, D.C.