By Hannah WegmanJanuary 14, 2016Blog, News and Events, Sanctity of Life 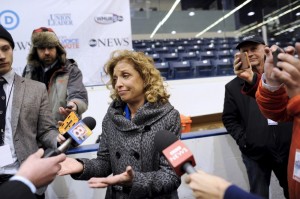 In a recent interview with Democratic National Committee Chair Rep. Debbie Wasserman Schultz, D-Florida, the interviewer asked if she noticed a generational divide between young women and women her age regarding their excitement over Hillary Clinton. The Congresswoman responded,

“Here’s what I see: a complacency among the generation of young women whose entire lives have been lived after Roe v. Wade was decided.”

It’s difficult to do … but with that comment, the congresswoman somehow managed to upset women on both sides of the issue. In a later interview, she clarified:

“For many in my generation who lived the majority of our lives with the right to make our own health care choices, there wasn’t a sense of urgency after Roe v. Wade settled our right to a safe and legal abortion. Since then, opponents worked aggressively to chip away at women’s reproductive freedom and they have awakened a sleeping giant in the millennials leading the fight in defense of the progress we’ve made.”

Progress Proud of their “legacy,” a few Boomers like Rep. Wasserman Schultz still make Roe v. Wade sound like it deserves a gold star in women’s history. Yet many women, especially pro-life millennials, consider that day to be one of our darkest.

Since the Court ruling, over 57 million babies have lost their chance at life under the guise of female liberation. Roe v. Wade set the precedent that it is acceptable to take innocent life if it makes women feel equal to men … that unhindered sex and abortion at all costs are the means to accomplish that end. What’s more, female leaders like the congresswoman now publicly condemn generations that value life — something which they should be applauding.