CWALAC Rally a Red, White, and Blue (and Pink!) Success!

By CWALAC StaffJuly 23, 2015News and Events, Support for Israel

The sound of flags unfurled and waving in the wind was the loudest sound we heard as we walked up to CWALAC’s rally, “Protesting a Bad Deal with Iran, American Hostages Left Behind.” The mood was tense. Surrounding the podium were members of the notoriously liberal Code Pink group. 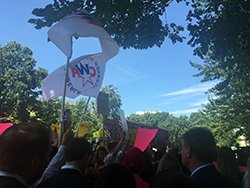 They had earlier shown up at another function for the express purpose of cheering on Secretary of State John Kerry. Now they were here to shut down debate.

As tension mounted, Code Pink began singing the word “peace” in several languages. CWALAC responded by singing, “America the Beautiful.” One side with “Peace with Iran,” the other with “Bring Our Hostages Home.” It was a true war of ideology.

Once things cooled down a bit, CWALAC CEO and President Penny Nance led the event by reminding the gathered audience and media that our president and his state department is guilty of ignoring Americans being held hostage in Iran. 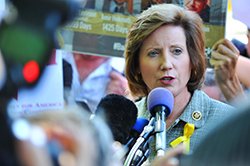 Truly, it is reminiscent of 1979, when Iranian students stormed the U.S. embassy in Tehran and successfully captured fifty-two Americans. All these years later, U.S. citizens are still being mistreated and unjustly imprisoned by the theocratic, Islamic regime.

Later, Rep. Vicky Hartzler spoke powerfully in defense of the hostages who were left abandoned and adrift in the midst of this so-called “deal.” She brought eloquence and strength to the truth about this crisis we’re in, and left the audience with a lot to consider. It was easy to see why she’s considered such a shining star in the dark sky of Washington politics.

The real battle would come as Sen. Ted Cruz attempted to speak. Clearly, Code Pink was there to shut him down, and with the National Park Service Police there to only keep the peace, it seemed there was nothing CWALAC could do to stop Code Pink. … until Sen. Cruz invited Code Pink forward and gave them a forum. 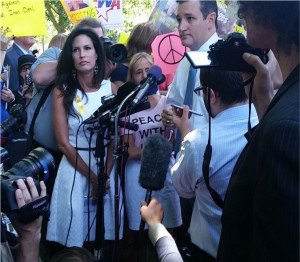 Code Pink co-founder Medea Benjamin accused Cruz of numerous things, including pushing the country closer to war. Cruz cut to the heart of it, responding by pointing out what Benjamin had conveniently left out. “You did not respond to the irrefutable point that this deal would send over $100 billion dollars to Iran and those billions of dollars will be used to murder Americans by jihadists.” He went on to point out Code Pink’s “Peace with Iran” signs and to remind them that the prevailing sentiment in Iran was not one of peace but of “Death to America.” 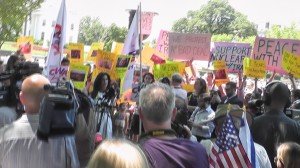 It was truth followed by truth followed by truth. Over and over, the sentiments flowed that we must never forget — and must continue to fight tooth and nail to free — the four current hostages, who have been held far longer than the 444 days the Americans in 1979. Pastor Saeed Abedini has been held over 1,000 days (three years), former-Marine Amir Hekmati has been imprisoned since 2011 (four years), former-FBI agent Robert Levinson has been missing since 2007 (eight years), and Washington Post reporter Jason Rezaian has been a prisoner for a year.

In solidarity with our fellow Americans being held by this repressive regime, we are wearing yellow ribbons to remember their plight and bring awareness to others here at home. 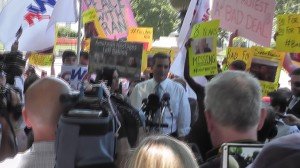 Sen. Cruz echoed Penny who said the recent negotiations with Iran evoked horrible memories from past dealings under the Carter Administration’s sweaty-palmed foreign policy and ineptitude. And he reminded us that on the very day that President Ronald Reagan was sworn into office, those hostages were released.

Peace through strength and resolve.

Let us all now call on Congress to pass a resolution of disapproval of this so-called Iran “deal.” It is little more than a bit of poor judgement and lack of content — as worthless as the proverbial paper it’s written on. Let us also demand that the president work toward the immediate release of U.S. hostages that were abandoned on the negotiation table in Iran.

We can do no less.