By CWALAC StaffMay 11, 2018Blog, News and Events, Support for Israel 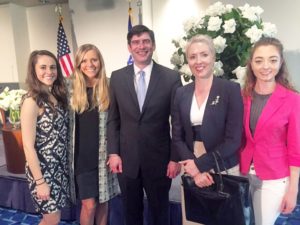 Last week, Concerned Women for America joined in celebrating Israel’s friendship with the Christian community at the sixteenth annual Christian Solidarity Event at the Israeli Embassy in Washington, D.C.  The celebration coincides with three major events surrounding U.S.-Israeli relations that were the main topics of discussion: Israel’s celebration of 70 years of the State of Israel and Jewish independence, President Trump’s historic decision to recognize Jerusalem as Israel’s capital and move the U.S. Embassy from Tel Aviv to Jerusalem, and the president’s announcement that the U.S. will pull out of the Iran Nuclear Deal. In addition to the Christian community, among those in attendance at the embassy were Counselor to the President of the U.S., Kellyanne Conway, Ambassador of Israel H.E. Ron Dermer, and the Reverend William Graham, grandson of the late evangelist Billy Graham.

After the crowd in attendance sang The Star Spangled Banner and the Hatikvah (Israeli National Anthem meaning “The Hope”), Rev. William Graham opened the event in prayer. Then, Kellyanne Conway spoke about why investing in relations with Israel was personally important to her as a Catholic woman whose faith was founded on “Judeo-Christian principles.” In her role as Counselor to the President, she highlighted why Israel is vitally important to the U.S., citing our shared values of democracy and freedom and calling Israel the greatest ally to the U.S. in the Middle East.  She then called President Trump “a man of action in a town of talk” as the first U.S. president to act on his promise to move the U.S. Embassy from Tel Aviv to Jerusalem, a move which symbolizes our acknowledgement of Israel as a nation state. She also underscored the dangers of the Iran Nuclear Deal to the U.S. and to Israel, a deal which President Trump declared “defective at its core” and announced the U.S. “termination of participation” in and withdrawal from on May 8.

Ambassador Dermer continued in this vein, praising President Trump for the upcoming move of the American Embassy to Jerusalem and pointing out that Israelis are not foreigners to this land as some have declared, but inhabited Jerusalem before Christ — King David having written psalms in Jerusalem three thousand years ago. He then focused on the Iran Nuclear Deal, saying the “insane” deal had damaged Israel’s national security and helps no one — not the U.S. and not Israel — no one, in fact, except for Iran, who refuses to recognize Israel as a nation and whose leaders have vowed Israel’s destruction.

Next week on May 14, Concerned Women for America CEO and President Penny Nance will attend the opening of the Embassy of the United States in Jerusalem at the invitation of Ambassador to Israel David Friedman, on behalf of you, our members. We are proud to support Israel and participate in such an historic event that will have lasting significance in the Middle East and on the strength of U.S.-Israeli relations. Please pray for wisdom and protection as CWA joins with U.S. leaders in Israel and for the continued support of a safe and prosperous Israeli nation.