CWA of Virginia Goes to Washington to March and Lobby

Virginia was well represented on January 25, both outside with the March for Life and inside as the CWA Project 535 volunteer lobbyists hit the halls of the Capitol. 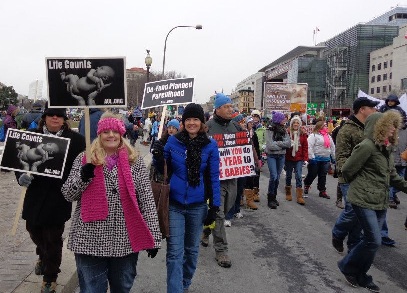 Debbie Biggs (in blue jacket), one of CWA of Virginia’s volunteer leaders shared her experience:

This was my first time at the Washington, D.C., March for Life, and it won’t be the last. The pre-march rally was to begin at noon, and the march was scheduled for 1:30. At around 11:50 a.m., we exited the metro station nearest the National Mall. My heart sank as I looked around at the sparse crowd. Where are the pro-lifers? It was cold, to be sure, and the forecast for snow could certainly be keeping some people home, but still I was very disappointed.

The rally began, and we listened to the motivating speakers, including Rick Santorum, a post-abortive woman, and a pregnancy center director. After a while I realized that the sparse crowd had grown. By the time the march began, the largest crowd ever for the March for Life had assembled-650,000!

The March for Life started down Constitution Avenue toward the Capitol. We were moving along in the midst of a huge sea of pro-lifers, speaking up for those who cannot speak for themselves. There were young people, post-abortive women, and men and women who were conceived in rape. Their signs told their stories:
“I am the Pro-Life Generation”
“I Regret My Abortion”
“Conceived from Rape-I Love My Life”

It began to snow, but the cold didn’t matter anymore. We were excited to be a part of this huge crowd supporting the unborn and their right to life. When we reached the end of the march, at the Supreme Court building, we stopped to pray. 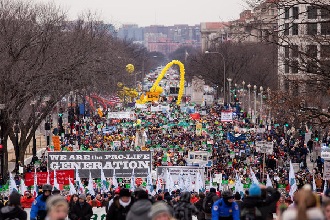 Yes, there were 650,000 people gathered to march and to pray for the unborn-but the media chose to ignore this event. But that is okay, because God sees, and God hears our prayers for the unborn. And that is what ultimately matters. Please put next year’s March for Life on your calendar. You will be glad you did!

“A battle-tested leader who stands by his convic

We didn’t travel all around the country on a big

Join us for our last She Prays She Votes 2022 roun