Two days before the April 12 hearing on Virginia’s proposed abortion clinic regulations, we realized those opposed to the new safety-for-women regulations planned to pack-out the hearing. CWA members, Sandi, Shirley, Judy, Holly, Wendy and State Director, Janet Robey, arrived three hours before the meeting was to start. We were met with rain, lightning and a tornado watch and quickly realized that our opposition had, indeed, mobilized supporters to fill the conference room. From past hearings, we knew there would be a public comment period and hoped that several of our members would have the opportunity to speak. 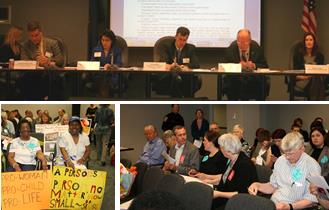 Knowing the public comment time is usually limited to 20 minutes with only two minutes allowed for each speaker, an audible gasp was heard when we learned 78 people had signed up to speak! The Board promptly voted to extend the public comment period to 60 minutes which allowed 30 individuals to speak. Would any of our members make the cut? Yes! God was faithful, and there was time for Wendy, Sandi, Shirley and Janet to share!

Various issues were passionately discussed regarding the need for safety regulations. Sandi, who works in the healthcare industry, stressed the importance of abortion clinics being required to maintain the same safety and health standards as any other medical clinic doing invasive procedures. Shirley shared her experience of having had an illegal abortion in 1965. Contrary to the images of back-alley abortions, her abortion had been performed in a very clean and sterile environment. Shirley then contrasted this with the numerous infractions recently documented at numerous Virginia abortion clinics.

Wendy spoke of being a tax payer and our tax money being used for these clinics and that Planned Parenthood’s profits should be used to upgrade their clinics. She also questioned how pro-women they actually are if they don’t provide proper facilities. Lastly, Janet referenced the left’s recent diatribe concerning this culture’s supposed “war on women.” However, the real “war on women” IS being waged in such states as Virginia where women undergo abortions every day without clinic oversight or accountability! Regulations would importantly curtail unsafe and unclean clinics where such medical procedures are endured by all races of women to the profit of Planned Parenthood and others. Dr. Kermit Gosnell’s recent trial in Pennsylvania has highlighted the need for such oversight and accountability. Janet concluded her testimony asking that the board vote to fully implement the abortion clinic regulations as written. All women need to be protected from any “Kermit Gosnell” practicing in Virginia.

Those opposed to state regulations far outnumbered those supporting the proposed safety regulations. Contrasts between activists were observed not only from their Board room speeches but also from attitudes, behaviors and dress, inside and outside the hearing room. Board Member, Amy Vest, recounted her desire to observe an abortion clinic firsthand; she made an appointment to visit a clinic in her area and was shocked by what she observed: a creaky staircase to the second floor (likely unable to support the weight of emergency technicians needing to gain entrance), a sink which would make it difficult for a doctor to properly scrub up, and a hallway too narrow to allow a gurney to pass if medical emergencies were to ensue. She spoke of her own experience 20 years ago of having a D&C after a miscarriage and being transported from the treatment room to recovery on a gurney; the women at this clinic had been required to walk from the abortion table to the recovery room where four recliners were available.

Two Board members requesting that the final vote on permanent clinic regulations be postponed were informed by lawyers representing the Attorney General office that to do so would create significant difficulties; the temporary regulations would expire, and the state General Assembly had already mandated these regulations be completed before then. A vote to postpone was overridden, 11-2. The same two board members then attempted an amendment which also failed! Finally, the moment of truth arrived! The official vote FOR abortion clinic regulations was recorded, 11-2 in favor! As pro-lifers respectfully clapped their approval, many of the opposition immediately rose with fake blood on their hands, chanting “The blood is on YOUR hands” and “Shame on YOU”! These actions necessitated police removal of EVERYONE from the board room! When we were escorted out the building’s back door, we were also met by a string of tactical police!

The State Board of Health Commissioners had nonetheless stood their ground valiantly, and CWA appreciates very much their MANY hours of work and sustained efforts over the last 24 months! As unfortunate as the post-vote situation became, WE are so thankful to God for: (1) the vote result, (2) CWA’s statewide supporters for their many prayers on our behalf, as well as (3) the actions of our wonderful volunteers! We could not make an impact without EACH of you!