CWA of Tennessee’s July 19 Foundations of Liberty Camp was a Smashing Success! 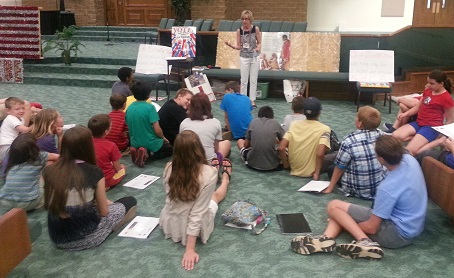 Cross Plains, Tennessee. July 19, 2013: On Friday, July 19, Concerned Women for America of Tennessee sponsored a Foundations of Liberty Constitution Camp. Children from both Robertson and Sumner Counties were in attendance to learn about the importance of our Constitution and our rights, which are given to us by our Creator, and that “We the People” are obligated to work to keep our Republic.

The historic-themed day started with the Pledge of Allegiance and a prayer. In Revolutionary period dress, Mr. Larry McClanahan, with the Sons of the America Revolution, spoke about the history of the Declaration of Independence. Claudia Henneberry, with Republican Women of Williamson County, shared in her kid-friendly style the vital importance of knowing the truth about our Constitution and founding documents.

David Causey presented in-depth details of the Bill of Rights followed by State Director of CWA of Tennessee Brenda Causey demonstrating the difference between a Democracy and a Republic, with emphasis on our country’s designation as a Republic rather than a Democracy, as some believe.

The fun-filled day ended with games centered around what the children had heard throughout the day and the much-anticipated awarding of prizes. One of the youths who participated commented that it was a, “fun, fun, fun camp!” Most participants rated the Camp a “10” and said they would recommend it to their friends next year.

Brenda Causey is the State Director of CWA of Tennessee and plans another Foundations of Liberty Constitution Camp next year. If you would like more information about CWA of Tennessee and any of their future events, please contact her at 615-943-4292 or [email protected]