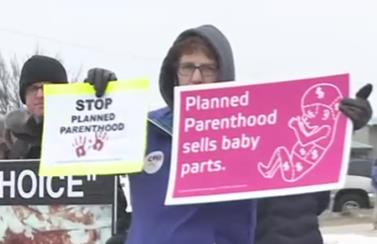 On Saturday, February 11, I joined pro-life activists at a rally in Moorhead, Minnesota, in front of the Planned Parenthood clinic to call for the end of all federal funding to Planned Parenthood! (Click here to view Valley News Live video coverage.)

On Saturday, February 11, over 50 men, women and children stood for justice and truth in Moorhead against the horrific practice Planned Parenthood uses to destroy the lives of babies.  “Even before the American people elected a pro-life president last November, Planned Parenthood was already feeling the pressure after they were exposed for selling baby body parts in 2015. This led to Congress investigating them, resulting in 15 criminal and regulatory referrals to the Department of Justice,” wrote CWA’s Communications Coordinator Janae Stracke in a recent article, “Planned Parenthood Ad Proves Waiting Periods Save Lives.”

What can you do?

“Therefore, since through God’s mercy we have this ministry, we do not loose heart …  It is written: ‘I believed; therefore I have spoken.’  with that same spirit of faith we also believe and therefore speak, because we know that the one who raised the Lord Jesus from the dead will also raise us with Jesus and present us with you in his presence.”  2 Corinthians 4: 1,13-14