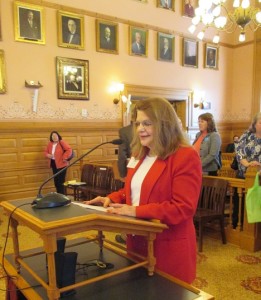 To the House Federal and State Affairs
Support SB95
March 9, 2015

Mr. Chairman and members of the committee, my name is Barbara Saldivar, and I am the State Director of Concerned Women for America (CWA) of Kansas. CWA is the largest public policy women’s organization in the nation. Thank you for letting me address the issue of the Kansas Child Protection From Dismemberment Act on behalf of the CWA of Kansas members. We heartily support SB95.

It was just a few years ago that Kansas was known as the “abortion capitol of the nation.” Today, Kansas women and children are living in what is now the third safest state in the Union for unborn children. While this is an amazing feat, We the People of Kansas hope to make it even safer for women and children and end abortion in its entirety someday. The end is in sight; but until then, Concerned Women for America (CWA) of Kansas will do everything in our power to see the abortion rate decrease in our great state.

Thus far, the Supreme Court has not outlawed abortion outright; however, they have ruled that certain procedures are not to be used in the process of abortion. One favorable ruling was the upholding of the ban on partial birth abortion, which protects those most vulnerable in our state, the unborn, by banning a particularly brutal and inhumane abortion method in which the child is removed from the womb feet-first and delivered before being killed
There is yet another extremely horrific, inhumane abortion procedure that Americans, specifically Kansans, must not allow. The process is the use of dilation, extraction and evacuation (also known as the “D&E” method).

The “D&E” procedure is used on women who are in their second trimester. It is a process which is both gruesome and extremely painful for an unborn child. It is quite easy on an ultrasound to see that the child from the top of his or her head to the bottom of their rump, measures the length of an adult’s hand plus a couple of inches. His or her mother can already feel her baby’s kicks.

The procedure involves tearing the unborn baby to pieces, limb by limb, organ by organ and ends with crushing the child’s skull. The pain the child experiences in this process is even more intense due to the fact that the nerves are much more sensitive at that stage of a person’s life.

If passed, SB 95 will protect Kansas children from experiencing this kind of painful death; it will also protect the mental and emotional health of the women involved in these abortions. We can do better as Kansans at protecting each other from this sort of torture. This bill speaks to the human dignity in all of us.

Clearly, this procedure is inhumane on multiple levels for both the unborn and their mothers. This has the potential to be a historic vote not only for Kansas, but also for the nation. If passed, Kansas would be the first state to ban dismemberment abortions. It will then pave the way for other states to follow suit. We encourage you to vote yes to move SB95 out of the committee. Thank you.