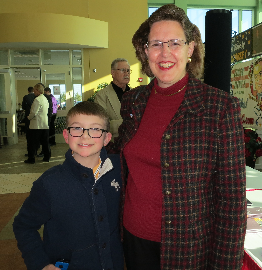 In February Concerned Women for America joined several other organizations to participate in a pro-life event featuring Gov. Mike Huckabee and sponsored by the Republican Party of Iowa. Nine-year-old Ethan Bates, son of Norm Bates and CWA of Iowa steering committee member and grassroots coordinator, Diana Cummins-Bates, enjoyed meeting Rep. Sandy Salmon and even made the cut into her weekly newsletter. Click here to view newsletter. Ethan is already politically astute for a young man his age, volunteering and helping at various events. It appears his political aptitude is already being noticed. Congratulations, Ethan!

Acting in her capacity as a Republican National Committeewoman, CWA State Director Tamara Scott, participated in a panel discussion on the so-called War on Women. Also participating in the discussion were the John Paul II Stem Cell Research Institute’s Give Cures Director, Kim Lehman, and President of the Iowa Federation of Republican Women, Jeanita McNulty.

The day was a successful series of workshops, panels, and special speakers with a reception following which gave Gov. Huckabee a chance to reconnect with Iowans who propelled him into his presidential run in 2008. CWA applauds any effort to make the womb a safer place. Fighting for the life of the unborn has been a long drawn-out battle and while good progress has been made, we still have much to accomplish. At CWA of Iowa, we will maintain our commitment of working to save a few until we can save them all.