CWA of California team members were back at the State Capitol Tuesday, May 6, 2014, to support AB 2336 before the Assembly Health Committee. AB 2336, the Sex Selection Abortion Prohibition, “enacts the Prenatal Nondiscrimination Act prohibiting anyone from performing or attempting to perform an abortion on a woman seeking to end the life of her unborn child due to its gender. The bill imposes civil fines ranging from $10,000 to $100,000 and provides for civil damages. AB 2336 also prohibits public disclosure of the woman’s identity without her written permission.”

The team arrived early to pray and visit a few legislators’ offices before the 1:30 p.m. hearing.

Assemblywoman Shannon Grove was kind to take time before the hearing to speak briefly with them. 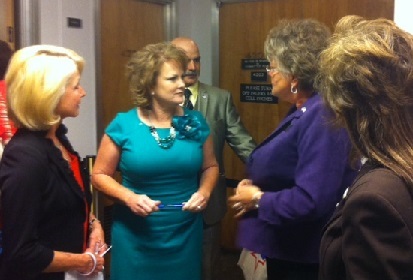 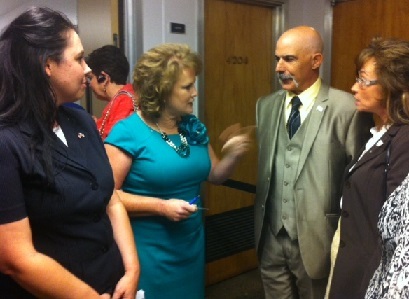 It was inspiring to hear Assemblywoman Grove present AB 2336 to the committee. Then after all the presentations were given and they asked who was there in support, each one of the CWA team stepped up and stated their name, organization, title and that they supported AB 2336. Patricia and Pat both spoke on behalf of the 22,000 CWA members in California, and the rest of the team spoke as citizens.

Each member of The Team was encouraged to be part of the legislative process in this way.

Now consider how you might take part in the process as well! Mark your calendar now to join The Team on Wednesday, August 6, for “A Day at The Capitol”. You will tour the capitol, observe the legislators in action, listen to a committee hearing, prayer walk, make a “Cookie Drop” and more. Women, men and teens are all welcome!

A special heartfelt thanks to the CWA of California Legislative Director Penny Harrington. Without her diligence on the multiple bills CWA of California is taking a position on, lobbying events like this would not be possible.