CWA Hard at Work on the Pain Capable Bill

By CWALAC StaffFebruary 2, 2018Blog, News and Events, Sanctity of Life

On Monday, January 29, the Senate failed to pass the Pain-Capable Unborn Child Protection Act. This legislation, sometimes referred to as the 20 Week Ban, protects unborn children nationwide after 20 weeks’ gestation based on the scientific fact that an unborn child can feel pain in utero. This legislation also protects women who face a substantially higher risk of complications from a late-term abortion.

Although it was highly unlikely the bill would pass, Penny Nance, CWA CEO and President; Caroline Aderholt, CWA Chief of Staff, and Jaime Ballew, CWA Legislative Director, met with Senate Majority Leader Mitch McConnell (R-Kentucky) several times to encourage him to put the bill on the floor. Each time there was hesitation because although we had worked since January to get cosponsors, there were no Democrat cosponsors on the Senate bill. Leader McConnell finally agreed to a vote, and we knew the stakes were high. The last time the Senate voted on this bill was in 2015 and although it failed, three Democrat Senators who are still serving, Sens. Manchin (D-West Virginia), Casey (D-Pennsylvania) and Donnelly (D-Indiana), voted in favor of the bill. We could not lose these Senators this time around.

Once we had a date for a vote, we activated our faithful grassroots to contact their senators and encourage them to vote in favor of this legislation. In CWA’s national office, we were working up until the vote took place to ensure your voice was being heard.

CWA national staff headed to Capitol Hill Monday to lobby Senators we knew would be on the fence or are facing reelection. Watch the Facebook Live from that morning to hear some statistics surrounding the bill and which Senators we were visiting. Letters urging a “Yes” vote were delivered by CWA staff to six offices.  Janae Stracke, CWA National Field Director and Annabelle Rutledge, CWA Communications Coordinator, stayed on the Hill all day listening to the arguments on the floor and live-tweeting at senators. They were joined by Penny in the Senate gallery for the vote. 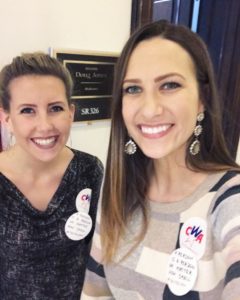 The bill failed on a vote 51-46 with Democrat Senators from overtly pro-life states choosing to vote against their constituents. You can learn how your Senator voted here.

The vote was disappointing but not unexpected. The Democrats may be acting out of their own interest, but science, common sense, and the majority of Americans (60%) are on our side. So we got right back to work. Sen. Lindsey Graham (R-South Carolina) asked Penny to a meeting in his office with other pro-life leaders immediately following the vote. The Senator tweeted a picture of everyone in his office and said “Vote just ended, and I’m already meeting with leaders of the #ProLife movement. Tomorrow, we start building additional support for Pain Capable. I have no doubt we will eventually be victorious! #TheyFeelPain

Since the vote, we have been calling out Senators who chose to vote “No” instead of representing their states. Sen. Heidi Heitkamp (D-North Dakota), Sen. Doug Jones (D-Alabama), and Sen. Claire McCaskill (D-Missouri) each represent pro-life states but chose to ignore their constituents who wanted a “Yes” vote on the Pain-Capable Unborn Child Protection Act. We posted a video of Sen. Heitkamp high-fiving Sen. Schumer (D-New York) after voting no, highlighting how out of touch she is with her home state. You can see the video here. \

Every senator who voted against this bill chose to side with human rights violators like China and North Korea where no such abortion restriction exists, instead of Americans who overwhelmingly want this enacted nationwide. Imagine that in a campaign ad.

Although this bill failed to pass this time around, we are able to use this vote to our advantage in the future and are confident that we can use this bill to move the needle on life at the Federal level.