By CWALAC StaffFebruary 2, 2018Blog, News and Events, Sanctity of Life 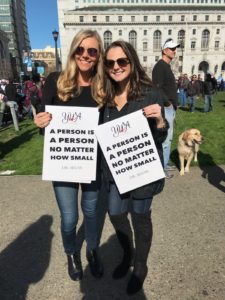 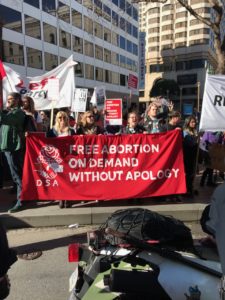 As we finished praying and began filling the street, groups of people began worshiping in their different languages. The entire march down Market Street was inspiring and humbling. We walked shoulder-to-shoulder with women carrying signs that read, “I regret my abortion.” As we approached Fifth Street, San Francisco police officers lined the street and created a wall between counter-protestors and the walk. Walking in San Francisco was a much different experience compared to the March for Life in Washington, D.C.  Grotesque signs, chants, screaming, sirens, and police officers made for a much more tension-filled walked.

Strong, shameless rhetoric lined the street plastered on signs and banners. The phrase we saw the most reads, “FREE ABORTION ON DEMAND WITHOUT APOLOGY.” However, the one that struck me the most, which I have seen many other times, says, “ABORTION SAVES LIVES.” I read that and stood still for a few moments. I looked around at the two sides and the police in between us. I felt the tension, the hurt, the anger. It was tangible.

These past few weeks have been heart-wrenching for many of us on the CWA staff. We have heard countless stories from women who have had abortions, from nurses who have helped perform them, and from children who have survived them. We have cried with these women and men.

And we will not give up. It is for our courageous leaders and supporters who have experienced loss that we continue to fight. In the midst of so much pain, there is HOPE. There is an abundance of peace, comfort and hope found in Jesus.