CWA at the March For All Women

On January 19, CWA’s Vice President of International Affairs, Dr. Shea Garrison, was a voice for conservative women at the March for ALL Women rally in Washington, D.C.  The March for ALL Women was sponsored by Independent Women’s Forum (IWF) and took place next to the 3rdannual Women’s March (WM) at Pershing Park. The Women’s March, which purports to speak for all women, does not include women who believe in conservative values or life or family values. The WM also stands in strong opposition to the Trump Administration. The March for ALL Women is an alternative which “represents the rising tide of women who stand against the divisiveness of the so-called Women’s March …” and who “in all their individual variety, deserve to be heard.” 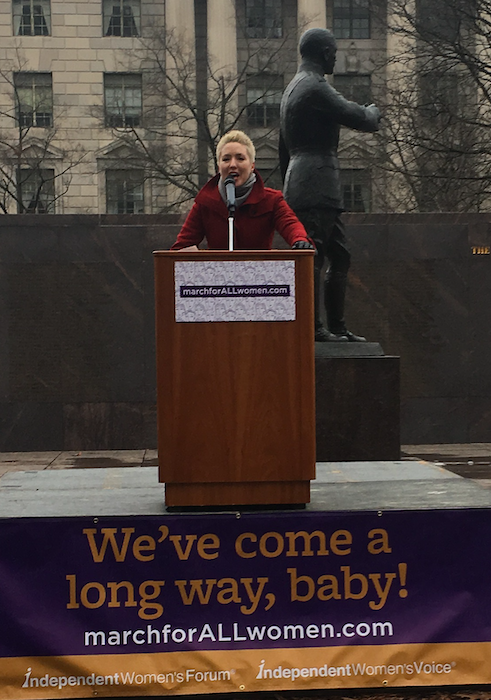 “Good morning. I’m excited to speak to you at this rally today because it celebrates the diversity of strong and intelligent women and contradicts the idea that all women think the same.

Our organization, Concerned Women for America, was actually founded on this principle 40 years ago.  In 1979, our founder Beverly LaHaye was determined that the feminist movement, which had detached itself from all semblance of conservative values, would not speak for her or for the millions of other women who valued family and life. Her message was simply this: “You-don’t-speak-for-me!”

Today, our message is still the same. That’s encouraging to me because women are continuing to insist that we have our own minds, we make our own decisions, and we can discern right from wrong.

A moment in my own history stands out to me, a turning point in my own thinking about this subject: A male colleague, a professor who I highly respect, told me that women who didn’t vote for Hillary did so because they weren’t yet ready for a woman president; that they couldn’t yet envision a woman leader of the United States.

How condescending to me. His statement implied that because I didn’t vote for her, I was sexist and backwards—it couldn’t possibly be that I disagreed with her principles and didn’t want them institutionalized into my country.

There are millions of women in the U.S. who believe in equality between men and women, but also believe in conservative values such as limited government, freedom of religion and belief, free markets, life, and family. And many of us are women of faith from a variety of ethnic and religious backgrounds.

If I have one message to leave you with today, it’s this: We need each other. I have found that women often feel excluded, isolated, even shamed because of their conservative beliefs. But they find strength to speak the truth when other women, like me and like you, have the courage to stand up and say: “You don’t speak for me”.

I believe God has given women a unique platform to speak truth into our homes, our communities, and across our nation–we don’t think just like men, or act just like men, or react the same way as men. What a loss if women don’t contribute to their fullest potential possible.  Some of us are wives and mothers, yes, but we’re also engineers, academics, activists, and artists.