Confident of Gorsuch on Life 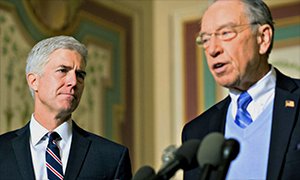 Look, I know the pro-life issue is an emotional one. The sanctity of human life and the intrinsic value of every human being as created in the image of God demand no less of us, so I would not expect anything less. But in assessing a judge’s record, we must be conscious of what we are looking for in making that assessment.

We do not need a judge who promises to overturn Roe v. Wade. That hideous case has been the focus of pro-lifers’ ire ever since it was rendered, because of the enormous impact it has had (almost 60 million lives lost now), but the fact is that it is just one part of the pro-life work.

The anti-slavery movement was a pro-life movement. Efforts against embryonic stem cell experimentation are part of the pro-life cause. In recent years, a troublesome pro-euthanasia movement has awakened, and that is something we will continue to fight vigorously.

Certainly, the fight for the value of every human life will continue and perhaps intensify when Roe is finally overturned.

So what we must look for in a judge is someone committed to the law and the Constitution as written — committed to our country’s founding principle that we are “endowed by [our] Creator with certain unalienable Rights, that among these are Life, Liberty and the pursuit of Happiness.” Those principles will guard life in all areas.

Judge Neil Gorsuch, President Donald Trump’s choice to replace the beloved Justice Antonin Scalia, has shown himself to be such a judge. In that sense, you can say he is “pro-life,” for he is a constitutionalist.

Especially when it comes to abortion, we need judges who are honest enough to recognize the complete mess the courts have made of this area of the law.

Abortion has been treated differently than any other area. Politics rules abortion jurisprudence. Even the Supreme Court finally acknowledged it in Gonzales v. Carhart, the Partial-Birth Abortion case. Justice Kennedy, writing for the majority, admitted:

It is true this longstanding maxim of statutory interpretation has, in the past, fallen by the wayside when the Court confronted a statute regulating abortion. The Court at times employed an antagonistic “canon of construction under which in cases involving abortion, a permissible reading of a statute [was] to be avoided at all costs.”

Similarly, Judge Gorsuch has stood up to the granting of a special process of review in abortion cases. In Planned Parenthood Ass’n of Utah v. Herbert, Judge Gorsuch, sitting on the 10th Circuit, dissented from the denial of rehearing en banc (by the full court) under similar reasoning.

Here is the short version. After Planned Parenthood was exposed selling aborted baby body parts by the Center for Medical Progress, the state of Utah concluded this illegal conduct warranted a suspension of public funding. Planned Parenthood sued.

The parties agreed that the case came down to one simple question: “Did Utah stop the funding because of the selling of baby body parts or because they perform ‘legal’ abortions?” This is a question of fact (legally speaking) that courts generally rely on the trial court (the fact finder) to answer.

The reasoning is that this court is better positioned (having examined the evidence closely) to make a final determination.

Therefore, an appellate court will only intervene if they perceive an “abuse of discretion” has occurred — that is if they find the lower court’s ruling grossly unsound, unreasonable, or illegal. That’s what the appellate court ostensibly found in this case in ruling for Planned Parenthood.

[W]hen the case reached this court, a panel disagreed and ordered the Governor to fund [Planned Parenthood]. In doing so, I respectfully submit, the panel acted inconsistently with this court’s previously uniform practice when it comes to questions concerning our standard of review and the burden of proof, questions of considerable legal significance. See Fed. R. App. P. 35(a) (en banc review is appropriate to “maintain uniformity of the court’s decisions; or … [if] the proceeding involves a question of exceptional importance”).

As you can see, special rules are created, procedures altered, and burdens shifted when many judges consider the “hot potato” of abortion. Again, Judge Gorsuch:

Respectfully, the panel opinion departed from these rules of review. Rather than afford the district court’s factual finding about the Governor’s intentions, the deference it was due, the panel offered its own independent assessment of the record …

Respectfully, the panel in this case not only conducted its own de novo review of the record, it relaxed [Planned Parenthood]’s burden of proof and even seemed to reverse it.

Notice the “pro-life” thing to do in this case is not to rule in a way that pushes pro-life efforts to defund Planned Parenthood. We can do that on our own through the legislatures, as it is supposed to happen. The “pro-life” thing for a judge to do is to uphold the law, to follow judicial procedures honestly and respectfully.

A constitutional judge resists the considerable social, political, and economic pressures that come when dealing with the issue of abortion and stays true to the principle of judicial restraint. All indications are that Judge Gorsuch is just such a judge.