Christian Bakers Still Fighting for Freedom at the Supreme Court 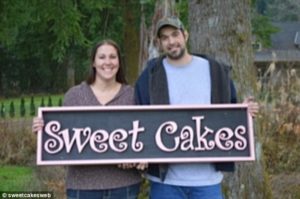 The Masterpiece Cakeshop case was a great win for liberty. But Colorado’s blatant hostility towards people of faith was so egregious that it made the case somewhat easy and, therefore, narrow in scope.  The fundamental question of whether the Constitution protects the right to operate a business according to one’s faith is still somewhat unanswered by the Supreme Court.

That is why this week, Aaron and Melissa Klein of Sweet Cakes by Melissa in Gresham, Oregon, have appealed the $135,000 penalty for “emotional damages” imposed on them for refusing to create a cake for a same-sex wedding. They have petitioned the U.S. Supreme Court for a writ of certiorari, asking them to take the case and address head on the issue behind these cases: the government’s insistence that it can compel citizens, under threat of law, to create goods with a message contrary to their religious beliefs.

The state is forcing Christian businesses to choose between their faith and their livelihoods. But the Constitution stands squarely against that. It expressly protects expression, regardless of how popular the view is at any given moment. And that is all that has changed with regards to same-sex marriage. Christian beliefs have not changed. What has changed is cultural acceptance of it. And now they want to punish people of faith for believing what they have always believed.

Government is not remaining neutral, as it must, on questions of faith, but it is showing a dangerous hostility towards religion that goes to the heart of constitutional protections.

Jack Phillip of Masterpiece Cakeshop is the prime example of this. Even after his win at the Supreme Court, he has been forced now to sue the Colorado Civil Rights Commission for their continued crusade against him. After his win at the Supreme Court, the Commission ruled again that he was in violation of the states “non-discrimination law” for refusing to create a custom-made cake for a woman celebrating her gender transition.

Jack and other Christians like him are the targets of a well-funded, coordinated attack against religious freedom from pro-LGBT groups. The Catholic News Agency recently catalogued some of the money being spent to demonize people of faith who refuse to go along with the politically correct narrative of the day. It reported on the Evelyn and Walter Haas Jr. Fund, for example, a San Francisco-based foundation reporting half a billion dollars in its coffers, which targeted Masterpiece Cakeshop specifically.

The Haas, Jr. Fund gave $200,000 to the National Center for Lesbian Rights for a campaign to “educate the LGBT community” about the importance of the case, and $100,000 to the Equality Federation Institute for the same purpose. It gave $100,000 to the Movement Advancement Project, a key LGBT strategy and communications think tank funded by Colorado entrepreneur Tim Gill, “to develop and test ads and other tools to educate and engage the LGBT community” about the case.

As you can see, the battle to protect our religious liberties is very much alive, and we must stay diligent.  The other side is committed to curtailing our religious liberties no matter the cost. Please pray for these important cases and other similar ones around the country.  As you know, Concerned Women for America’s legal team will be engaged bringing the voice of conservative women before the courts, and we are already working to develop the briefs for these cases. But part of the hard work necessary to win must be done by you and me personally as we engage others to gain a proper understanding of religious freedom. A lot of money is being spent to demonize people of faith, so we cannot let up. We will not. We will remain faithful to God and His Word, until the day of His return.