Better than the Twelve Days of Christmas 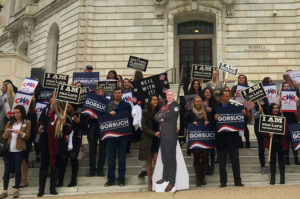 The United States Senate has now confirmed the 12th circuit court judge under President Donald J. Trump. Just yesterday, they confirmed the nomination of James Ho to the Fifth Circuit Court of Appeals.  He joins 11 others who were confirmed for the appellate level:

Stephanos Bibas to the Third, Don Willett to the Fifth, John K. Bush, Joan Larsen and Amul Thapar to the Sixth, Amy Barrett to the Seventh, Ralph Erickson and L. Steven Grasz to the Eighth, Allison Eid to the Tenth, Kevin Newsom to the Eleventh, and Gregory Katsas to the Court of Appeals for the District of Columbia.

This is simply an impressive display of judges, all seriously committed to the Constitution and their limited role as judges. President Trump has now set the record for appellate court confirmation in the first year of a presidency.

That list, as you may have noted, does not even count the “morning star” of the Trump Era appointments, Justice Neil Gorsuch to the U.S. Supreme Court.

President Trump and his team are to be commended for their commitment in this area that often goes overlooked once the innumerable pressures of a young presidency take hold of a new president’s calendar.

Also to be commended are Senate Majority Leader Mitch McConnell (R-Kentucky) and Senate Judiciary Committee Chairman Chuck Grassley (R-Iowa), who have faced a wide array of tactics from the other side of the aisle to try to slow down the process.  Yet their commitment to a fair and dignified process has been exemplary.

Personally, I would like to commend you, the supporters of Concerned Women for America, for your support of the efforts to confirm constitutional nominees. There is no question in my mind that you have had a considerable impact in making sure the Senate did not play into the liberal media’s hand by getting distracted with the latest talking points.

The attacks on Judge Barret, because of her faith, were particularly disturbing, and your voice was crucial to making sure things didn’t go down a wrong path, establishing an embarrassing and regrettable precedent for future nominees.

But the battle is not over, as you know. The early success of the Trump Administration only means we can expect increased opposition to future well-qualified, constitutionally minded, principled candidates. As we celebrate today, the left is furious, and we can expect them to increase the pressure on liberal senators to obstruct nominees for any or no reason.

Let us continue to pray and remain diligent as the new year approaches.  Talks of a possible vacancy at the Supreme Court continue here in Washington, D.C., and we must be ready at any minute to demand and support a candidate committed to the Constitution as written, instead of someone embracing a so-called “living Constitution” that they can manipulate to fit their preferred policy choices.