Are Humans an Invasive Species?

By Chaney MullinsSeptember 5, 2016Blog, News and Events, Sanctity of Life 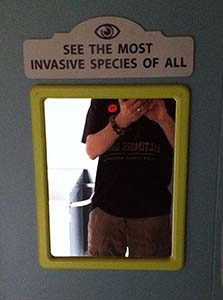 Every summer, my family and I make a trip to Calvert County to visit Old Spout Farm, a historic property that our cousins own on the banks of St. Leonard’s Creek.  For many years, they have urged us to visit the local Calvert County museum to experience their science exhibits.  This summer, we finally did, and we were beyond impressed with the quality of the museum experience.  That is up until one particular exhibit.

At first it seemed innocent — invasive species were introduced as a problem in many ecosystems.  Various suggestions were presented to solve this issue, such as eating invasive species in weird culinary creations.

But then we came upon a strange mirror on the wall, and I realized with horror the message being conveyed. “See the most invasive special of all” — and then you were staring at yourself.

My scientific curiosity turned to outrage.  What are we teaching children on field trips about themselves?  After they have just learned one solution to invasive species is eating them, they then learn that they are an invasive species.  This was unacceptable.

Invasive species are defined as: “Plants, animals, or pathogens that are non-native (or alien) to the ecosystem under consideration and whose introduction causes or is likely to cause harm.”

Putting aside the question of whether a human can even be called an animal, the idea that humans are alien on earth is problematic in so far as earth was created for us. Genesis 1:28 reads, “God blessed them and said to them, ‘Be fruitful and increase in number; fill the earth and subdue it. Rule over the fish in the sea and the birds in the sky and over every living creature that moves on the ground.’”  Some eschatological theologians even believe Christ’s return will eventually result in the establishment of His Kingdom in a restored earth.

We must admit that at times humans have abandoned their call to stewardship of Earth and have contributed to environmental and social problems in this fallen world.  But to imply that humans invaded the earth — that we aren’t supposed to be here, that we mess up earth’s balance and perfection (which is implied to be clearly more valuable than us) — is a great devaluing of human life. This isn’t to say poverty and starvation are not series problems in some regions.  But humans are just as much a solution as they are a problem. We are complex beings with potential to follow or depart from God’s will.  But we are not something to be eliminated!

This “humans are invasive” attitude has profound implications for public policy.  If we see humans as invasive, then, logically, there should be fewer of them.  I couldn’t help thinking of China’s disastrous one-child policy, recently amended due to the negative effects.  I couldn’t help thinking of the scary eugenics movement in response to this idea that humans were overpopulating the earth, and all the human rights violations that came out of it, like forced sterilizations and human genetic engineering research.

Bottom line: Believing humans are an invasive species can lead to clear violations of the sanctity of life.

The idea that human beings are actually invasive to the world has morphed from eugenics to abortion in this culture of death.  This exhibit can create deep-seated issues in young children who needn’t feel guilty for being alive.

Human life is the most valuable resource of all, and I would hope our educational museums teach children to value their own lives and those of their fellow man.