American Hostages Released – Our Work is Not Done 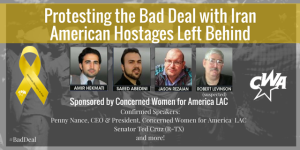 “It is always a great day when Americans are freed and reunited with their loved ones. We praise God for His protection of these men while they were held by the Iranians.  We are rejoicing in the safe return of these men and our answered prayers.  But our work is far from done. Concerned Women for America was at the front of the fight opposing the deal with Iran last summer and petitioned for the release of our American hostages. Our Yellow Ribbon Rally was held in front of the White House and was attended by Ted Cruz and other leaders who joined our fight. Our rally made national news and our voices were heard.  We thank our members who wore yellow ribbons to remind them and others to pray for the release of these men.

“There are still more American hostages being held: ex-FBI Agent Robert Levinson and two others. We also have great concern about the $150 billion and the prisoners being released to the hands of some of our greatest enemies. Make no mistake, the Iranians are not our friends, and our fight is not over.

“Concerned Women for America and our half-a-million members will not easily forget the choices our current administration has made, and we will work to educate the public to see an administration in place in our country who will put the safety of Americans first.”

For an interview with Penny Nance, please contact Janae Stracke at [email protected] or 712-269-1724.


Error: API requests are being delayed. New posts will not be retrieved for at least 5 minutes.