“All gave some; some gave all.” 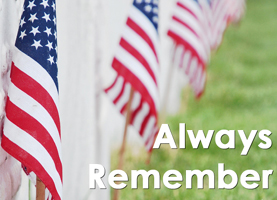 Today, a mother is longing for her son. A wife is missing her husband. Children are wishing they could spend the weekend with their mom or dad. Sisters are missing their brother who went to war one day and never returned. Gold Star military families have had to make sacrifices that most will never be able to comprehend. And today, we honor those who laid down their lives to defend our great nation.

We, as a nation, are forever indebted to those who paid the ultimate sacrifice to ensure that the freedoms and liberties that make our nation exceptional remain intact. Unfortunately, those veterans who were lucky enough to make it home are forced to deal with life and death situations at the Department of Veterans Affairs, the very department that was created to ensure their well-being. Today’s veterans are all too familiar with the disconnect and the lack of concern that surrounds their sacrifices.

Then-Senator Obama said in 2007, “When a veteran is denied care, we are all dishonored. It’s not enough to lay a wreath on Memorial Day, or to pay tribute to our veterans in speeches. A proud and grateful nation owes more than ceremonial gestures and kind words. Caring for those who serve and for their families is a fundamental responsibility of the Commander-in-Chief.”

What President Obama said then is still absolutely correct now. The Commander-in-Chief owes those who paid the ultimate sacrifice while serving our nation, the reassurance that their fellow service members, who fought with them side by side, who made it home, are being taken care of here on the home front.

Unfortunately, we have seen little more than speeches and wreath laying from the Obama Administration in the past five years. After over a decade at war, veterans who made it home are being faced with significant challenges as they transition back into civilian life. Post-9/11 veterans have all too often had to face an unemployment rate that is well above the national average, a widening military-civilian divide, and the most ever-present VA-wide healthcare scandal that has resulted in the death of dozens of veterans at the hands of VA mismanagement.

Often veterans find themselves being unable to translate their military experience into a language which civilian recruiters or human resources personnel can understand or relate. This contributes to the underemployment of many veterans who have valuable skill sets and experiences that are not comparable to those without military experience.

Veterans often come home to a society that does not understand the difference between Memorial Day and Veterans Day. Most think it is one and the same. You are supposed to thank veterans on those holidays, right? Wrong.

While they are both days to reflect on people who have served in the military, there is one unique difference. Memorial Day is a day to honor, remember, and pay tribute to those who paid the ultimate sacrifice to our nation in the line of duty. People gave their lives to ensure that we continue to live free in our great nation. Freedom is not free. It is paid for by our service members who gave their lives when called upon to do so. They deserve the respect and remembrance of those who are still here to enjoy the freedoms and liberties their sacrifices continue to provide us.

Most notably, veterans are being failed by the VA in more ways than one. Not only do they have to deal with a failed and bloated bureaucracy that is hindering their access to healthcare, many have died as a result.  It is a national disgrace to know that our veterans, who have sacrificed so much, are being taken advantage of by the VA. Veterans don’t ask for much. They merely want the benefits that they have earned to be provided to them in a healthy and safe manner. They deserve better than what they are receiving from the VA.

So, this Memorial Day, do something different. Make it known that you will not stand for the way the VA is treating veterans. Help educate your friends on the difference between Memorial Day and Veterans Day. Go to a war memorial. Visit a national cemetery. Talk to veterans about their friends who died fighting for our country and learn their stories.

Those stories deserve to be told, and they deserve to be heard. We must continue to tell their stories and remember their lives to ensure their legacy lives on. President Reagan said it best, “Freedom is never more than one generation away from extinction. We didn’t pass it to our children in the bloodstream. It must be fought for, protected, and handed on for them to do the same, or one day we will spend our sunset years telling our children and our children’s children what it was once like in the United States where men were free.”

Without their sacrifice, we would not be living in the greatest and freest nation on earth. We owe our freedom to those who loved our amazing nation enough to lay down their lives for it. We must never forget that.

Amber Barno is a Military Advisor at Concerned Veterans for America. She is a former Kiowa Warrior helicopter pilot in the Army with combat tours to Iraq and Afghanistan.  Penny Nance is CEO and President of Concerned Women for America.