70 Years Later, We Remember the Importance of D-Day 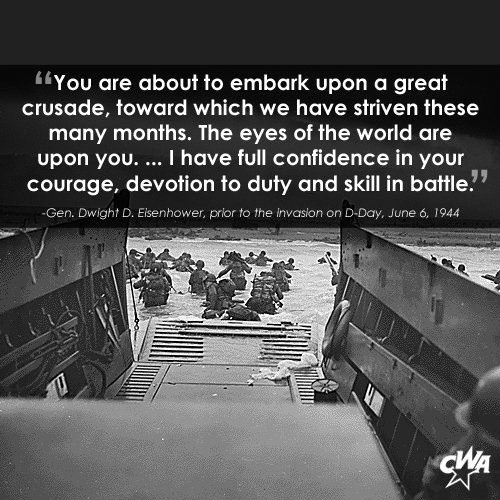 On this day in 1944, roughly 156,000 American, British, and Canadian forces stormed five beaches of Normandy, France. “D-Day,” as it is known, is remembered as the beginning of the end of World War II and was the largest amphibious attack in history. During the attack, codenamed Operation Overlord, the American forces captured Utah Beach and Omaha Beach. However, America faced heavy enemy resistance on Omaha Beach and suffered over 2,000 casualties. Altogether, over 4,000 Allied troops lost their lives on D-Day. The Battle of Normandy, which lasted from June 1944 to August 1944, eventually led to the liberation of Western Europe from Nazi Germany.

Today, on the 70th anniversary of D-Day, we honor those who descended into the crucible of war for the sake of their country — and we’re especially grateful and humbled by those who made the ultimate sacrifice. As we reflect on the courage of those known collectively as “The Greatest Generation,” we’re inspired by the fact that, out of uniform, they looked like ordinary men on the outside. By this we are reminded that it is what we find on the inside of a man that counts most. As Gen. Dwight D. Eisenhower’s commented years after the war, “What counts is not necessarily the size of the dog in the fight — it’s the size of the fight in the dog.”

Concerned Women for America thanks the Greatest Generation for its selfless service, for doing what was necessary to preserve and defend freedom — not just in America, but across the globe. Their commitment to liberty was real; ours should be no less. Let us honor their sacrifice by taking up the cause of freedom and defending it with every fiber of our being. We owe them no less than this.