This was one of the most impactful visits for our bus! We drove from Jerusalem to the border of the Gaza Strip and toured Nativa Elseron, a Kibbutz right on the border.

A woman from the community, Ronni, shared her story and the realities of living on the border with constant threats, bomb shelters, and missile alarms. On our way to visit with Ronni, we walked past a children’s daycare. Toddlers played outside as Ronni explained the reason for the layout of the play area and the system for gathering children inside when there are security threats. It was sobering to understand the reality of their life. Many of our girls raised the question, “Why do you stay here?” Their response, “Why would we leave? This is our home.” 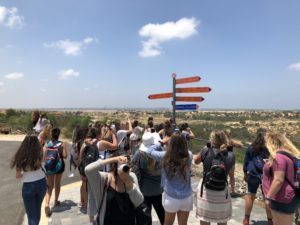 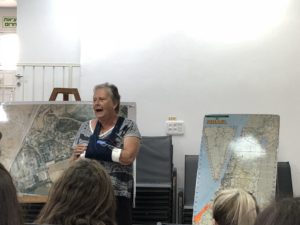 Israel is a small nation, and there aren’t many places to which you can run. The Israelis who live in the border towns near Gaza are not willing to uproot their lives and allow Hamas terrorists to win. They have adjusted. They rely on excellent Israeli security, the Iron Dome, and the Israeli Defense Forces to keep them safe. They understand that there is risk to living there. In actuality, they explained how their daily lives are similar to Israelis across Israel. Walking through their Kibbutz and driving in the bus, it was easy to understand their point of view that day. It was a beautiful sunny day with no threats from across the border. Kids were playing outside, and moms were sitting on their porches. It was a normal day. 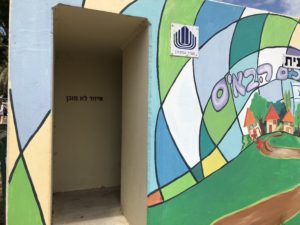 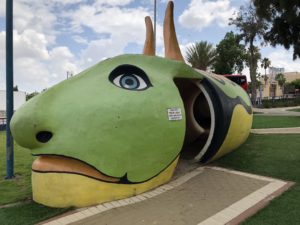 On the flip side of the same coin, Sderot, the city where we were, is different from other cities in Israel. In Sderot, it is hard to look around without seeing a bomb shelter. At first you might not see it, but that bus stop is a shelter and so is the play structure at the playground. This is an area where when the siren goes off, you have eight seconds to find shelter. Israel has made sure that bomb shelters are abundant. Each house is equipped with one room that acts as a shelter. This is their reality. Our young ladies were thankful for the opportunity to tour this area, meet Ronni and tour this Kibbutz. Because of fire kites sent from Gaza to ravage the Israeli border towns and intense rocket fire from Hamas that has significantly increased this summer, we were one of the few buses who were cleared to visit Sderot on their tour.

We spent our last full day in Tel Aviv before flying out late that night to the United States. We toured Jaffa, the port from which Jonah fled, and the House of Simon. We also visited Independence Hall where Israel declared its independence on May 14, 1948. We sat in the room and listened to recordings of David Ben-Gurion pronouncing the establishment of the State of Israel.

The 10 days spent in Israel were FULL, a little exhausting, but absolutely life-changing. Thank you to everyone who prayed for us and followed along! 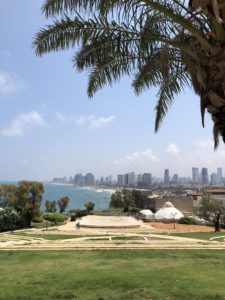 Here are some closing thoughts from participants:

“From being baptized in the same river where Jesus was baptized to floating in the Dead Sea, sailing on the Sea of Galilee, reading the Scripture in the land where the stories took place, praying and crying at the Western Wall, observing traditional and modern Israeli culture, visiting the Garden Tomb where Jesus was buried and where He rose again, learning about the geopolitical issues that plague the region, worshipping in Jerusalem, and making new best friends, Israel was an absolute dream! I embarked on this journey to discover the roots of my faith, and I left having accomplished that and so much more. I was blessed to grow not only in my faith, but in my role as a leader and advocate for the peace of Israel. I am in awe of the resilience of this nation and its people, and I am eternally grateful to have been a part of God’s story in the Holy Land.” Brittany McMillian, YWA Chapter member, University of Alabama

“When I first heard about the YWA trip to Israel, I was instantly interested and had a desire to go; however, I thought that I would just forget about it and never follow through. Fast forward to the day that the application was due, I found out the cost of the trip, the details of the schedule, and that three of my best friends had decided to apply. I had gotten the “okay” from my parents to apply, and the only thing that was holding me back from attending the trip was an overwhelming sense of fear and worry. I was fearful of going to a country with such controversy, fearful of traveling there, and was feeling as if the Lord was telling me that this trip might not be for me. I prayed about it and went to a worship night on campus to gain some clarity and realized that fear and worry are not of the Lord; they are from Satan. I realized that only fruitful and glorifying things for the Lord would occur from a trip to Israel, and that I was letting Satan get ahold of me. With only about 10 minutes left until the deadline, I quickly submitted my application, and am so grateful I did. This trip to Israel blessed me in so many ways, and I had the most incredible experience learning more about who Jesus is and taking some of His very same steps in the Holy Land. I grew in my relationship with Him and was constantly encouraged and inspired by the amazing group leaders and other girls on the trip. It truly was an experience of a lifetime!” Olivia Szolack, YWA participant, Liberty University

“My time in Israel changed my life. From picking up rocks at the Sea of Galilee to visiting the peace wall along the Gaza Strip, I learned so much about all that has happened and is happening there. Coming home I brought with me a bag of Israeli snacks, but also a passion for Israel and all of its people! I will never stop praying for the Israeli people, especially the ones that had such a huge impact on me while I was there. And to the amazing girls I got to travel with; each one of you taught me so much about life and friendship. I am so, so blessed. The past eleven days have given me memories that I will carry with me forever. Thank you to each person who poured into me during this trip; our God is real. He is alive! And we all got to walk in His holy land! I am so thankful.” Abby Voggenreiter, YWA member, Liberty University