Editor’s Note: This article contains pictures from the Women’s March which are unsuitable for children and may not be especially safe for work. We advise reading this article away from others. In most cases, the pictures are crass, vulgar, and an embarrassment to those who value civil discourse.

I hope the women at the “Women’s March” took a moment to realize how amazing it is that in America we have freedom of speech. In many places around the world, women and men can be jailed for expressing their beliefs.

I am deeply glad that Americans have freedom of speech.  I am deeply thankful for the First Amendment.  I am looking forward to expressing my own pro-life beliefs at the March for Life this coming Friday.

I want to say that the “Women’s March” participants had some valid concerns, but I often disagree with their perspectives on the causes and solutions of societal problems.

But despite any common ground, it’s clear that this march took a lewd turn, better shown than repeated. Their signs were some of the most vulgar displays I have ever seen. I’ve collected some of them for you here — but I warn you they are not pretty.  I’ve divided them into three categories: Women’s Body Parts, Abortion, and Disrespecting the President.

Is that all that women are?  How is wearing a vagina empowering women and respecting our bodies?  How is self-degradation going to end societal degradation?

Then there’s the overemphasis on abortion at this March — when abortion is itself one of the greatest violations of women’s rights.  Abortion disproportionately kills more unborn females than males, preying on vulnerable women for profit, and rejecting pregnancy and mothering as a unique power of the female body.  These women claim to pro-choice, but are only fighting for one choice — abortion — while banning pro-life women from this march and supporting Planned Parenthood.

Finally, is disrespecting the President of the United States the right way to advocate for what you believe? Surely the office of president is enough to garner some semblance of respect and peaceful disagreement, not Madonna’s cries of wishing you could blow up the white house.

Also see Media Research Center contrast of the Women’s March and the March for Life: 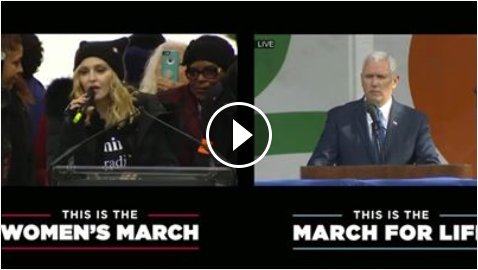 The message of the march was convoluted – but whatever it was, it was not a “woman’s march.” The fact that the marchers dared to proclaim that being a “woman” equals embracing this sort of march is offensive — it’s the very hatred, degradation, and alienation they claim to be against.

It is for the very purpose of being an alternative voice in the public square that Concerned Women for America even exists.  Beverly LaHaye started CWA because radical pro-abortion, anti-marriage feminists did not represent all American women.

We give other women a voice, women who know that profanity, crude hats, sexual license, abortion, economic liberalism, and disrespecting the president are not ways to empower the women of America.