What’s the latest on tax reform? 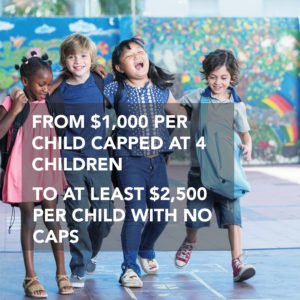 This week, the Republicans finished up their plan to overhaul the tax code. There is always a lot of work behind the scenes on big issues like this, and CWA has been working with the Senate, the House and the Administration to advocate for a pro-family tax code. Families are the foundation of civil society, and tax reform that is pro-family is an investment in our future.

A huge part of our work surrounds the Child Tax Credit (CTC). Concerned Women for America was an original advocator for the CTC, and we are continuing the legacy of our founder, Mrs. Beverly LaHaye, by continuing to work toward a tax system that does not penalize families. Not only are we working to increase the Child Tax Credit from $1,000 annually to $2,500 annually, we are also working to remove the cap on the number of children for which the credit applies; we are pushing to have this credit apply against payroll taxes, and we are working to get rid of the marriage penalty.

As a whole, this tax reform package must provide a net gain for families, because as any parent knows, having a child is expensive. The Department of Agriculture estimates that for a middle-income family to raise a child born in 2016 until he/she is 17, it will cost $233,610. The national average of the annual cost of childcare is 31% of the median household income, and in 33 states, the cost of infant care is higher than paying for college tuition. Increasing the CTC allows for more take home pay and, therefore, more financial flexibility raising children. For a family with four children, $4,000 annually may not make a huge impact, but $10,000 annually with the expanded CTC may allow a mother to work part time instead of full time and, therefore, spend more time at home with her children.

Ivanka Trump’s office has been leading the charge on this issue from the early days of the Trump Campaign and Penny and CWA’s legislative team (Caroline Aderholt, Ashley Traficant, and Jaime Ballew) have all met with Ivanka personally about modernizing our tax code so that it helps families. Additionally, Ashley and Jaime have been meeting with key Senate and House staff as well as senators and members of Congress to reiterate to the authors of this legislation that the tax code must help families.

Now that the tax reform package has been revealed, we will continue working with the administration, House and Senate leadership as well as with other groups to get the expansion of the CTC and tax reform, as a whole, accomplished.