By Kelsey GoodFebruary 25, 2019Blog, News and Events, Sanctity of Life 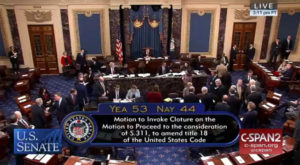 On the heels of the most electrified month of the life debate, 80% of Americans have spoken out that they do not support infanticide.

Think about that for a second.

“Picture a baby who’s already been born, who’s outside the womb gasping for air. That’s the only thing that today’s vote is actually about. We’re talking about babies who have already been born. Nothing in this bill touches abortion access.” (Senator Ben Sasse)

And they voted NO. To not provide care to crying babies after a failed abortion attempt.

This is absolutely unconscionable.

Every Democrat who made remarks on the Senate floor before the vote was claiming that this bill was an attack on a woman’s right to abortion when nothing in this bill touches abortion. We’re talking about AFTER abortion.

Whether it be their personal inhumane carelessness or their allegiance to the radical extremism of partisanship, there is no covering up such a disgusting ploy.

How long, O Lord, how long?

That was the question that replayed in my head as I watched the votes roll in on the Born Alive Abortion Survivors Protection Act.

That’s what this is.