The Jane Roe Most Don’t Know

By Hannah WegmanJanuary 29, 2016Blog, News and Events, Sanctity of Life

Roe: a name that has lived in infamy since the Roe v. Wade decision. But have you ever wondered who the woman is behind the name? 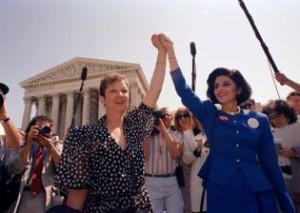 For starters, that isn’t her actual name.

“Roe” is simply the pseudonym that was used for a woman named Norma McCorvey. If that caught some of you off guard, what about the fact that she actually never had an abortion and is now a staunch pro-life advocate? In a lengthy affidavit to a New Jersey District Court in 2000, Norma detailed her story. Quite unexpectedly, the “Roe” I had for years painted in my mind is no more. Her story is powerful and one that abortionists would not want disseminated. Seeing as this month marks the anniversary of Roe v. Wade, it’s not just applicable but significant to share.

Norma McCorvey became pregnant with her third child out of wedlock and was pursuing the idea of receiving an abortion; however, since abortion was illegal and at the time rather taboo, she wasn’t able to obtain truth or fully grasp the implications. Norma planned on illegally aborting her baby at a clinic she had heard about, but when she arrived at the location given to her, the center was not there. She remembers leaving frustrated yet relieved. Later, an adoption attorney referred her to an attorney named Sarah Weddington.

Click here to read the rest of this article on CNS News.