Thank You for a Successful 19th Annual Day at The Capitol 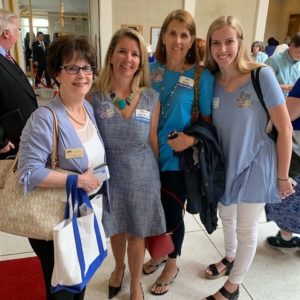 Last Wednesday, we had an amazing turnout for our 19th Annual Day at the Capitol in Raleigh. We had over 100 attendees participate in our lobbying efforts to override the veto of SB 359, the Born-Alive Abortion Survivors Protection Act.  NC Values Coalition joined with us again this year for our legislative briefing, lobbying efforts, chapel time, and observance of a session of the State House of Representatives.

We were grateful to have abortion survivors, Gianna Jessen and Claire Culwell, join us when we lobbied legislators on SB 359.  You can watch North Carolina House Speaker Tim Moore’s (R- Cleveland) press conference with Gianna and Claire here.

Sadly, despite the heart-wrenching appeals and prayers, the efforts to override Gov. Roy Cooper’s veto of SB 359 in the House came up short.  Though the North Carolina lawmakers voted 67 to 53 in favor of overriding the veto, it failed to reach the three-fifths approval required to do so. The North Carolina Senate approved the override several weeks ago.

CWA of North Carolina would like to thank the following legislators:

Lastly, we want to thank each of you who joined us in Raleigh, as well as those who were praying with us from home. We continue to ask for your prayers and ask that you take the following action.

Take Action:
(When talking to legislators’ offices, be sure to let them know that you are a member of Concerned Women for America of North Carolina.)

Continue to pray fervently, “But Jesus beheld them, and said unto them, ‘With men this is impossible; but with God all things are possible.’” Matthew 19:26