By Sancha Haysbert-Smith | Louisiana | No Comments 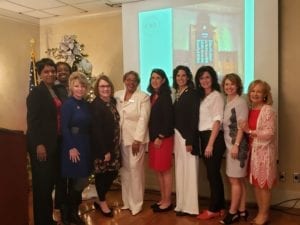 Concerned Women for America (CWA) of Louisiana’s Lafayette Prayer/Action Chapter wrapped up a remarkable year with a special Christmas luncheon on Friday, December 6, attended by local and state officials, CWA of Louisiana leaders from across the state, and enthusiastic members and guests. Leaders recapped CWA of Louisiana activities in 2019, highlighted a CWA core issue – fighting sexual exploitation – and armed attendees with biblical perspectives on current issues. There were also a few surprises.

Cindy Doré, long-time friend of CWA, shared how one group is fighting sexual exploitation in Acadiana by reaching out to strip club workers. She encouraged attendees to obey when God prompts them to step out of their comfort zones. Attorney General Jeff Landry’s representative distributed resource information to equip warriors in the fight against human trafficking.

“We think the event was a huge success, not only because the seats were filled, or because we gained several new members, but the men and women left energized and equipped to make a difference. All glory to God,” Baudoin reflected.