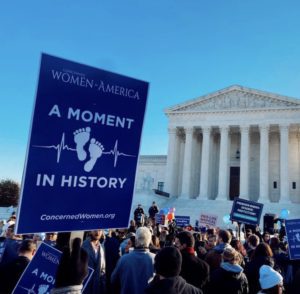 By Katie Everett | News and Events, Press Releases, Sanctity of Life | No Comments

Washington, D.C.— Penny Nance, CEO & President of Concerned Women for America, the largest public policy organization for women in the nation, had this to say about the leaked drafts of the United States Supreme Court Dobbs v. Jackson Women’s Health Organization:

“This appears to be another attempt by the left to intimidate the justices to uphold a law that is clearly unconstitutional. On the contrary, these tactics should only embolden the Court to stand firm on law and principle. Chief Justice John Roberts must take charge of his court and issue this decision as soon as possible, sending a clear message that the Court will never be intimidated.

“The hundreds of thousands of members of Concerned Women for America  remain prayerful and cautiously optimistic as we work to provide loving alternatives to the violent ending of a human life through abortion.”