City of Atlanta Admits “Religious Beliefs Are Not Welcome Here”

Atlanta Fire Chief Kelvin Cochran was fired last year by the City of Atlanta for his religious beliefs. Earlier this year, Chief Cochran filed a discrimination lawsuit against the city. A hearing was held yesterday, October 14, 2015, on the City of Atlanta’s motion to have Chief Cochran’s lawsuit thrown out. CWA of Georgia State Director Tanya Ditty attended the hearing and was both disturbed and astounded by the comments made by the city’s chief counsel Robert Godrey. Read more here.

Chief Cochran’s Alliance Defending Freedom co-counsel provided the following update on yesterday’s hearing. Please continue to be in prayer for this case. The wheels of justice grind very slowly, as will this case.

The Judge was clearly prepared and well versed in the contents of the briefs on the issues.  The hearing went much longer than I expected.  We began promptly at 10:00 AM and did not conclude until after 12:00 PM.  Hearings of this nature typically take no longer than an hour.  The Judge was thorough and I did not perceive any bias in her questioning of both sides.  She was courteous to both sides.  Unfortunately, she did not rule today.  At the City’s request, she allowed them 5 days to submit a supplemental brief and gave us 5 days after that to reply.

The most disturbing parts of the hearing were listening to Robert Godfrey, the chief counsel for the City, disparage Chief Cochran and all those who agree with biblical views of marriage and sexual behavior.  He opened the hearing with a gross distortion of the Chief’s book.  Repeatedly during the hearing he told the Judge that Chief Cochran accused homosexuals of engaging in beastiality.  He accused Chief Cochran of believing that women were second class citizens.  Anyone who has read the Chief’s book or met him would not recognize the man described by Mr. Godfrey.  It was shameful, in my opinion.

The most disturbing argument made by the City, repeatedly, had to do with our Free Exercise rights.  The City has now openly admitted in federal court that Chief Cochran was, in fact, fired for his beliefs.  He was fired for his faith.  Repeatedly, Mr. Godfrey stated that it was the content of Chief Cochran’s book, the views expressed in that book, that led to his termination.  If you hear anyone say Chief Cochran was fired for failing to follow some work policy or anything other than his faith, you can now quote the chief counsel for the City to confirm that this case is all about Chief Cochran’s beliefs, our common Christian beliefs on marriage and sexual behavior.

The City attorney explicitly argued that Christians, like Chief Cochran, like us, can believe what we want so long as we “Keep it to yourself.  Keep it at home.  Keep it at your bible study.”  That is an actual quote from the City attorney.  Our government officials do not hesitate to trample on free speech and freedom of religion where we dare to speak or act on biblical teachings about marriage or sexual behavior.

The thought police are alive and well in the City of Atlanta.  The City clearly believes, as argued this morning in open court, that the law in America can punish thoughts and beliefs rather than conduct and actions.

Despite these arguments from the City (and likely in large measure because of them), I believe the outcome will be positive for Chief Cochran’s case.  The Judge will probably dismiss a handful of claims but retain the majority of the claims, including the Free Speech and Free Exercise claims.  I anticipate it will be at least 1 – 2 months more before she issues a ruling and then we can proceed to discovery.

Please continue to pray for Chief Cochran, his family and his finances.  He is taking a bold stand for all of us and he is paying a worldly price for that stand.  Please also pray for me and the entire ADF legal team – that we remain sharp, professional and well prepared at every turn.  Pray for the Judge that she will issue a fair ruling based upon the facts and the law that is free from all politics and prejudice.  Finally, pray for the Atlanta elected officials who sincerely believe that we should keep our biblical beliefs to ourselves, our homes and our churches.

Check this out: “One Generation Away” Movie Viewings – Defending Religious Liberty in Georgia

Join Us at the Standing for Our Faith Rally

Join CWA of Georgia at the rally!

Atlanta Fire Chief Kelvin Cochran was fired last Tuesday because of his religious beliefs. Please show your support for Chief Cochran and attend the “Standing for Our Faith Rally!” 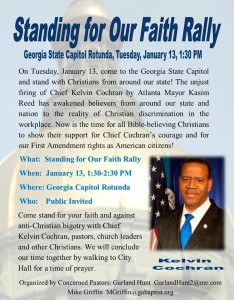