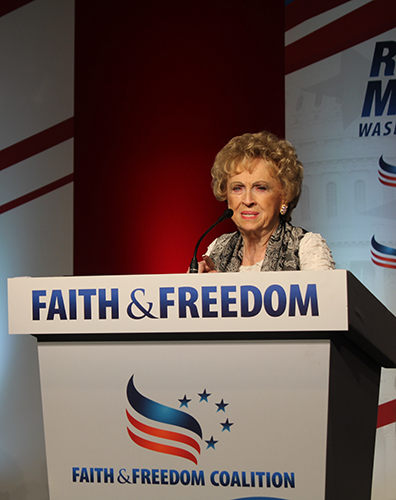 The 2016 Road to Majority Conference, which was put on by the Faith and Freedom Coalition and Concerned Women for America was one for the books. Members of Congress, Senators, politicians, pastors and television personalities made their way through the stage over the three-day conference. “Breakout sessions” with Faith and Freedom staff, leaders at Concerned Women for America and many other organizations met in small settings to provide in-depth information, practical application ideas, and open time for questions.

While the entire event was packed with great learning opportunities and an abundance of information, Saturday night is likely to be most memorable portion of the conference for all attendees. Faith and Freedom bestowed the Winston Churchill Lifetime Achievement Award on the most deserving woman in the room, founder of Concerned Women for America, Mrs. Beverly LaHaye.

In 1978, Mrs. LaHaye was watching Barbara Walters interview Betty Friedan of the National Organization for Women (NOW), when Friedan stated, “I plan to spend the rest of my life seeing that America becomes a humanist nation”. In response to that, Mrs. LaHaye vowed to spend the rest of her life working to ensure America’s public policy reflects our Judeo-Christian heritage. Concerned Women for America was born from her commitment to educate and alert Christian women who were not represented by the anti-God feminist movement. The following year, CWA became an official non-profit organization in San Diego, California. After membership soared over 100,000 women, CWA opened another office in Washington, D.C., in 1983. What began in Mrs. LaHaye’s living room has blossomed into the nation’s largest public policy women’s organization with 500,000 participating members across the country, over 450 Prayer/Action Chapters and Home Teams, and more than 30 Young Women for America Chapters on college campuses. 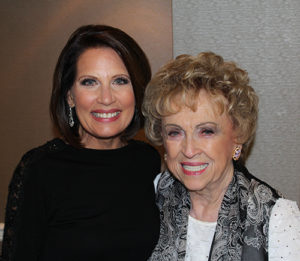 For decades, Mrs. LaHaye has led Concerned Women for America and fought tirelessly for Christian values and conservative principles to be reinstituted into public policy. Mrs. LaHaye has testified multiple times before Congress and the U.S. Supreme Court. She hosted a daily radio broadcast show called, “Beverly LaHaye Live,” while being interviewed regularly on different news outlets. She served as the President and CEO for many years, and still serves as CWA’s Chairman of the Board and Founder.

A video recording from the 1987 CWA National Convention played prior to Mrs. LaHaye receiving her award at the Road to Majority Conference. It showed President Reagan exclaiming, “It’s wonderful to see you all here. It makes me feel as if the reinforcements have just arrived.” For this legacy, Mrs. LaHaye was honored with this esteemed award. Former Congresswoman Michele Bachmann opened up the floor, humbly thanking Mrs. LaHaye for her leadership, accomplishments and for helping inspire her to political engagement. Current President and CEO, Penny Nance, gave a poignant speech thanking and honoring her hero and boss. She, along with the President of Faith and Freedom Coalition, Ralph Reed, presented the award to Mrs. LaHaye as the crowd rose to their feet to honor her, many with teary eyes. 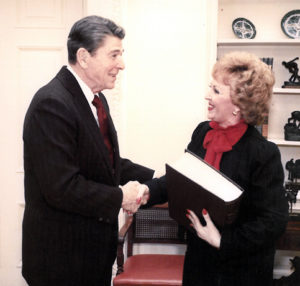 Mrs. LaHaye thanked her Heavenly Father, giving Him all the glory for all that she has done, stating, “I hope to one day lay this award at the feet of Christ”.

As a member of Young Women for America, the opportunity to witness Mrs. LaHaye receive this award was enlightening and inspiring. Her act of obedience in 1978 has played a significant role in changing lives with the gospel, empowering like-minded men and women to take a stand for conservatism, and influencing political leaders and public policy. It is an honor to stand on the foundations that Mrs. LaHaye has laid, to carry her legacy on my college campus alongside some of the brightest young women. Thank you, Mrs. LaHaye, for saying “yes” to God’s call on your life, leading with integrity, prayerfully walking by faith and being a light in darkness.

There is an absence of words to express the honor Concerned Women for America feels for being such a significant part of Mrs. LaHaye’s legacy and the gratitude for her lifelong faithfulness serving God and country. Her legacy will pass from generation to generation, as Concerned Women for America carries the torch lit by Mrs. LaHaye’s bold step of faith. 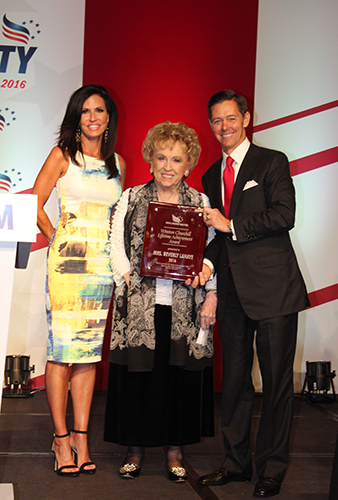 —
Kelsey Gold is part of CWA’s 2016 Ronald Reagan Memorial Internship class where she serves for the Legislative Department.