Now I Have a Purpose 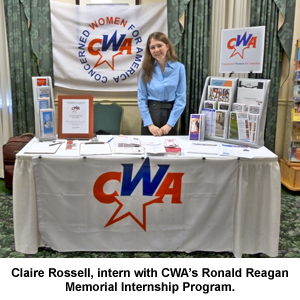 As an intern at Concerned Women for America this spring, I had the opportunity this past weekend to accompany CWA’s grassroots development director, Rebekah Yellis, to the Pennsylvania Leadership Conference (PLC) in Harrisburg, Pennsylvania. My internship in the legislation department of CWA’s Washington, D.C., office means that I have spent a considerable amount of time on Capitol Hill and writing to congressmen using the phrase “on behalf of our 500,000 members nationwide.” However, by attending this state-level conference and helping to run the CWA booth in the exhibit gallery, I was finally able to interact with CWA’s individual members putting faces to the names that I have been representing for the past several months.

For the first time in my internship, I was able to escape the “Washington-bubble” to talk to women (and men) who are concerned about the direction our nation is heading. I was able to get away from the political strategy, the maneuvering, and the jargon and was given the chance to engage CWA’s members and prospective members on issues that really matter to them. One woman I met told me the story of how she had been strongly pro-choice, but with ultrasound technology had been convinced to become a staunch pro-life advocate. She told me she was curious about pro-life legislation at both the state-and-local level, and I was able to help her to get connected with a local CWA Prayer/Action Chapter in Pennsylvania. Another man told me about his concerns about ObamaCare and wanted to know what was being done in Washington, D.C., about the repeal effort, and I was able to point him to some resources that the Beverly LaHaye Institute had published.

While I enjoyed having the opportunity to meet and listen to notable speakers like Rick Santorum and Herman Cain what I most appreciated about attending the conference in Pennsylvania was that it gave purpose to my work. No longer am I just writing letters and articles or attending meetings for the sake of doing those things for “our members.” But now I know who I am representing and working for those hundreds of individuals that I had the privilege to speak with and listen to at the Pennsylvania Leadership Conference.