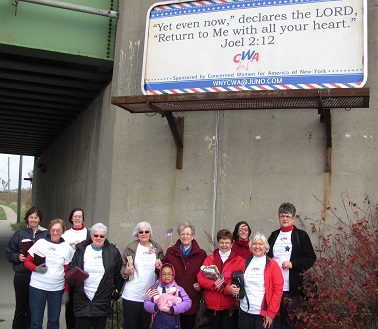 I am excited to tell you that a billboard declaring God’s heart now stands on Dick Road in Depew, New York. For a few months now our CWA of New York Prayer/Action Chapter of Lancaster has been burdened for our nation and its spiritual decline. We have had a desire to declare hope for the nation through God’s Word. We wanted to express God’s heart towards mankind. After much prayer and discussion we unanimously agreed that a billboard would be appropriate and that Joel 2:12 would be the verse declared. With little to no effort the funds poured in from the members of our small chapter without any outside solicitation or help. Last Saturday it was cold and windy yet ten of our members and one grandchild stood by the billboard, thanking God, and asking Him to touch the hearts of the people who drive by with the knowledge that they need Him. It was an exciting time. Please pray with us that many will read and respond to this billboard and place their hope in God.